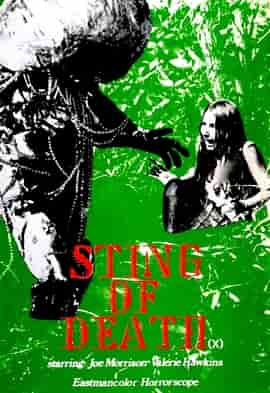 Plot – Spoilers:
A human jellyfish from the ’60s. This is pure trash cinema with gloriously bad effects and all the enjoyable shit that usually accompanies it.

A bullied disfigured man seeks vengeance against the world. There’s also the trope of that one sympathetic woman in his life. His makeup is terrible though – it’s like some personality-dullening cream that wasn’t even properly applied, with portions of his forehead escaping the makeup-artist’s attention.

So there’s this island where a biologist is doing something, while wearing embarrassing shorts. He’s assisted by some dude and the jellyfish guy. Jellyfish lusts after the biologist’s daughter who arrives with her friends. Another obnoxious crowd whom the writer of this trash decided to refer to as ‘young people’ also turns up. Some of them look really old for a bunch of grad students. But that’s relatively a trifling matter. As soon as these young people arrive, they start dancing. Because whenever young people go anywhere, they start dancing. Unfortunately the lot die too soon, and mostly en masse.

Apart from the pleasures of lolling around in garbage, Sting of Death is educational, at least personally. Now I know where Manowar possibly got their name from.

Hey EUM guys, I am not requesting anything, but do you have any virus type movies lying around to upload? I am sick of Covid 19, need a different virus to cheer me up. If you do have some, I am hoping it is the one thats been on my mind for a long time, which was one of the sickest examples I have ever seen. ( I will name it if you want to or not if you dont ). Cheers .

We just posted one – Aimy In A Cage. Not sure if it will interest you 🙂

Please use the Contact Page for any specific movie you have in mind.

Yeah, thx EUM, will check it out. Have posted on the contact form as you said and have recommended some films. Doubt you will find any of them as they are very hard to find and I think all are in the Unearthed stable. Hopefully you may have some under the back of a couch but if not its not a big deal but thx for trying anyway. You are my heroes always!

Is this in any way a different version than the previously available Something Weird Video release? the length is reeeaaal close. Just curious. I don’t think i could withstand a back to back comparison watch! Anyway love you guys!

This is from the Arrow release. No differences though.