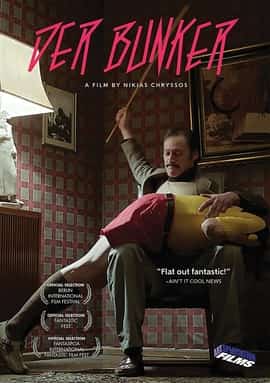 Plot – Spoilers:
A self-proclaimed physicist seeks out the remotest lodging he can find in snowy Germany. He has grand plans of working on a theory centered around the Higgs particle and needs all the solitude and quiet he can find. So he isn’t too fussed when his room turns out to be one without ventilation and in a modified bunker.

The family that’s renting out the place seem a bit strange with their developmentally stunted, overgrown son who they believe is a future president of the USA. But the lodger himself is strange in his own ways and soon blends in seamlessly among these sub-intellectual lot by enjoying their hot meals and being patronizingly polite.

The design aesthetics in Der Bunker are dazzling and perhaps Lynchian in influence. There’s one more possible influence – One Flew Over the Cuckoo’s Nest.

Well,that was an amazing movie! Thank you admin.

I swear I thought I saw this movie on this site before. Lol

One of the few amazing german genre movies which we (i speak as a german) were able to get produced here in germany. The german film foundation treats horror or other genre movies not as nice as they should giving their money rather or only to those young filmmakers that are focused on mainstream success or everything with Til Schweiger in it. So most of the film students have a rough time getting their debuts released or produced on a wider scale.
Other honorable mentions from the last years would be DER NACHTMAHR or DER SAMURAI and SCHNEEFLÖCKCHEN as well as WILD and the beautiful but brutal nihilistic TORE TANZT (which i think i saw here somewhere…it received a different title in the US…i think it was EVERYTHING IS GONNA BE ALRIGHT – which believe me…it won´t)

If Martyrs was a German comedy…

This was one of the better German movies I’ve seen recently. I’ve never heard of it before, a great addition to the archive.

The fuck was that? It wasn’t bad just what the fuck. And that was the ugliest inbred retarded man child I’ve ever seen in my life where did they find him, the circus?

garbage and cringy. saying that from a German perspective

Great movie. Reminds me a bit of Fassbinder. Those bits of good German movies!!

In an isolated home resides a joke of a father, the devouring mother, and the over-sheltered son. The father sports clown make-up whilst telling bland jokes for entertainment, this after spending the day as one of those pseudo-intellectual types who, although expressing some minimal philosophy about knowledge, acts as if he is as smart as he says he is. The dinner scenes present the vibe as if they listen to classical music because that’s what an intellectual would apparently do, not because they enjoy the music. He is a clown. The mother is overwhelmed by her pain and fear, so she babies this “kid,” whom is obviously not a kid, to refrain from the ultimate sacrifice of letting go of that which you love most. Heinrich is something akin to a false god in the sense that the he rules the mother with fear and emotion, rather than righteousness. At its base level, the movie obviously emphasizes on the conditions of such a tyrannical set-up between the parents and Klaus, especially as he has to fight his mother off him just to escape her clenches. Underneath the family parable lies some political undertones. Perhaps it is a mockery of America in the sense that Klaus, a German, is expected to become President of the White House (sure), when he can’t even list the capitals of some of his brother countries. It appears to nod to inept politicians, and I think this shows once the parents boast about Klaus being on his way to the Presidency after completing his first task of merely remembering a handful of capitals. It could also potentially mock the general perception of the typical American family by Europeans. While I first thought the creator of this film was expressing some past experiences of his own childhood, considering the fact that Klaus is the only character given a proper noun distinguishable from a role makes me think this is somewhat of a familial/cultural study of notions previously explained. One user analyzed utilitarian and imperial concepts, which I agree with. What I think is interesting about the Student is, despite showing disagreement with the parents’ dynamics, how quickly he begins to play into this structure. It almost makes me think of how easily civilians play along with the contemptible practices of authority with minimal coercion; think of the pathology of Nazi Germany, the absurdity of rhetoric pertaining to implementing COVID vaccine mandates, identity politics, or whatever makes you think of the pathology of tyranny. All the Student needed to play along into the sickness was to be calmly persuaded by the mother that he deserved to be punished. Right from the beginning, he could’ve intervened, but he instead essentially gave up his own responsibilities to play along with the dynamics, using threat and punishment in order to persuade Klaus to succeed. It’s almost as if the only qualitative aspect of him being the “Student” is that he is giving into the power of the authorities to the extent that he begins playing their game. The final shot of the movie furthers this notion, as he is cleaning the house of his authorities, one of them having recently stabbed him, whilst they enjoy their dinner together.

Nikias Chryssos the guy who directed DER BUNKER released his follow-up to this only a few months ago here in Germany. It´s called A PURE PLACE and in that one he ramps up the weirdness even more. Daniel Fripan who played little boy Klass in BUNKER is also back in somewhat of (again) special role. 😀
https://youtu.be/iZSIVNaMWXw

by the way: The follow up to THE BUNKER was released a few weeks ago on physical media so it should be easy by now to watch it. It´s called A PURE PLACE and is a totally different beast.
https://youtu.be/iZSIVNaMWXw