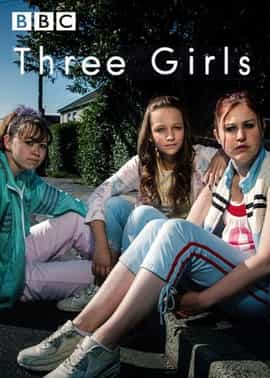 Plot – Spoilers:
Based on the UK grooming and teen exploitation case from the late 2000s. This was originally a TV mini-series that has been put together here as a 3 hour-long piece.

Teenage girls are lured by older men with simple bait like free booze, a place to party or even feigned protective guardianship. Sometimes the girls themselves foster the abuse, which lasts for years through a combined failure of families and the system.

Three Girls follows some TV tropes but does a decent job of highlighting the important issues of the case – racism, class and social prejudice, political correctness, and most importantly, the helplessness of the victims who were often brushed aside as trash. The excellent casting choices for the three girls, definitely helps here.

Random Trivia
The Finsbury Park terror attack on random Muslims has been alleged to have been inspired by this series.

Molly Windsor who stars as one of the victims, also acted in the similarly themed The Unloved. 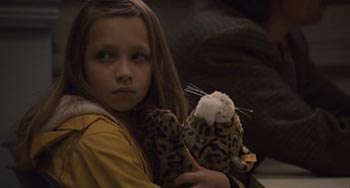 this was scary, watching this i felt 14 all over again i saw it through their eyes how easy it is to get wrapped up in all this. terrifying how sex trafficking can unfold right infront of you and it all just seems normal at a certain point. you dont know when you’re being groomed till its too late and by that time the world has already failed you these men knew that and did what they do best manipulate and gaslight their victims knowing likely no one would take them seriously. its truly one of the reasons some victims like myself don’t ever really come out about it. im glad they recieved justice at the end at least.
thank you for the upload, i would add depressing to the tags because this definetly was lol

Muslims have come to the West, and think that western woman are sluts. So they groom them (because their own kind does not allow pre marital sex). Because they target a low socioeconomic layer of society, it’s unlikely they’ll get any backlash. The answer: dress your randy English daughters in hijabs/burkas or whatever restrictive Islamic garb does the job and I guarantee the Muslims will lose interest.

And stupid West for colonising these countries because now they are obliged to let them in. Might as well cover up girls – your fate is sealed.

No sympathy for the dumb westerners.

I am from the southside of Chicago,and deviant pedophile rapists sex offender/traffickers pimps,come in every race,every profession,male/female..its a sick sad world,and also thousands of girls also choose this profession willingly and voluntarily as sex workers who are trying to unionise,NV,PA,NY etc.its definately horrible any way you look at it.lets try blaming humanity and morality,instead of races or police..better screening and security at motels and spas massage parlors would BE A GREAT FKN START.Happy holidays..great movie BTW.

Prostitution is just an easy way for many women (regardless of level of IQ) to make quick load of money. There was a female race car driver who had have a great title in Bathurst racing championship which currently is a high end prostitute and also she left racing. No men here to blame.

The joo is responsible for the state of the world. Without jooish subversion, none of the western countries would be in their pathetic state.

Almost 3 hours? wow hahaha! I need all my time for this.I hope is very good.THX Eum!

Whoaaaaa…. That was a lo-o-o-o-ong-ass movie. But I can’t say I wasn’t warned. All-in-all, not a bad watch. A little drawn out in places but that’s a mini series for you. But it does hit home. Especially if one remembers this whole fiasco. And I remember it fairly well.

!!! MASSIVE SPOILER !!! I have to say I was really quite surprised this subject was tackled, made into a mini-series and aired on the telly. Reason being this was all about the usual suspects, the Global Elite covering their asses on forced immigration gone wrong while pointing fingers at a very pissed-off population and calling them “racist”… just like they do here.

Thing is this pedo thing is part of their culture. Watch a documentary entitled “Dancing Boys” for a closer look at this twisted underground culture.

Anyway, I was truly surprised. I thought for sure someone was going to be exposed for the literally dumping this crap on England, ignoring the will of people, calling them racist, and pretending it wasn’t happening – all over Europe. I was thinking it must be due to public outcry and electoral changes in Parliament, but in the last few minutes of the movie they pulled a typical Global Elitist move and blamed somebody who really had nothing to do with it.

And the gullible and the naive rejoiced in the fuckery because they truly were useful idiots Vladmir Lenin named them to be.

Worked in GMP after this had happened for a while, whole games changed now, shits top priority, as it should be. fantastic film. 10/10

I feel like this movie is meant for young kids to watch, and bad parents.

And then they throw Tommy Robinson in jail for trying to spread awareness about this.

Very good drama. I missed it on TV when it was first broadcast… Pretty intense. ..some excellent acting from a well rounded UK cast .. true as well so thought provoking and sad. .. .

Fuck this girl.
She deserved every last bit of it.
She had a family who wanted at least better than what she was getting and her own depraved stupidity lead her to much much worse.
You reap what you sow.
Dumb cunt.

This is horrible and terrifying. Im from the North of England and when i was 12 I went into a mobile store to get a phone case, run by Muslim men. I went inside and asked for a case for my little Galaxy S1 phone, they told me to come into the back of the store which was through a door at the back i could see at least 2 men in there sitting down and watching from the doorway. I felt uneasy and went and got my mum who was waiting outside. Real quickly they took back their offer and told me they had no cases for my phone.

This is real and happening. The racism towards Muslims is not okay though. Not all Muslims are like this white people can be pedos and rapists. Remember that bad people are not made through race or religion.

I remember watching “Three Girls” at the time and being shocked that the BBC had produced and aired something so (comparatively) honest. I mean, obviously it didn’t address the elephants in the room and the true sources of our woes but it came closer on the issue than any other mainstream TV programming. Kinda like their *very* (again relatively speaking) brave “Last Whites of the East End” a few years ago, which addressed how immigration had pushed natives out of London and thus destroyed Cockney culture.

Does this movie includes sex scenes ?

Can’t feel sorry for someone being a slut then crying rape when you keep going back because you get free stuff and money. Personal accountability is a thing of the past with this current female liberal mentality.