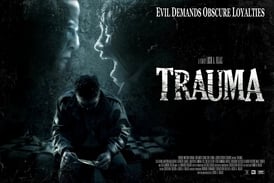 Plot – Spoilers:
Trauma starts off with a shocking scene set in the era of Pinochet (late ’70s Chile). We then move to contemporary times, where one of the characters from this scene has now blossomed into a nasty being, whom the folk in his small Chilean town fear down to their balls. Into this town arrive four Santiago women, including a lesbian couple. The idea is to party at a family home, an idea that soon turns into a gate-crashed event.

Trauma is regarded by some as a sort of spiritual successor to A Serbian Film. And you can see why – the political overtones are there here too, though more obviously. There’s also a terrible scene involving a baby (that’s kept more off-the-camera here). But if you ask me (for whatever reason, if you do), Trauma is best watched on its own merit. Comparing it with the other masterpiece will only lead to disappointment.

Great film, thanks for the upload.
I’d only ever seen this in Spanish so the subtitles filled some gaps.

I recently watched this on another platform and i have to say it is definitely a gnarly movie. I can absolutely see people calling this a “spiritual successor” to A Serbian Film.

Cannot compare to “A Serbian Film” which is far superior in terms of directing, acting, plot – even though the theme is horrendous. This one drags, and unless you are into lesbian activity the female sex scenes are tedious and all the girls are boring. I didn’t really care what happened to them. One good thing though: it ends – eventually.

Meh, the first 2 messed up scenes are basically a copy of Serbian Film.

Good movie. I wish the ending was better. Definitely a watch.

As others have stated, A Serbia Film was better. Though it has its moments, the ending was a let down. I do like Juan in this movie more than Milos in ASF.
Best watch in the dark because some scenes were harder to see. Overall I’d give it 3 out of 5

Remember this movie is based on reality and The Serbian was not. I believe for the most part female reaction to being humiliated and raped is firstly fear, secondly, distrust with your own reality, and then anger and acceptance. However, I state this due to the reactions the women and men in the movie who were in fear of a madman and so- called son who terrorized a village; when they had weapons to end the madness in first place. Including , the village police ( johnny come lately asses) shoot the victim and not the assailant. The police new of their murderous ways and allowed both to exist freely. To conclude this is the world we live in, some will look the other way and do nothing when faced with real problems like in this movie.
I yield my time.

IDK how this was compared to the one and only Serbian Film, I expected this Trauma to be much more disturbing

but overall it’s a great movie 8.0/10 to me coz: rape and other crazy scenes could’ve been longer and more detailed

No comparison between this and A Serbian Film… Each movie is a stand alone work equally enjoyable in their own way.

Honestly this movie was not at all as disturbing or great as a serbian film. I agree with both movies are cool in their own separate ways and honestly shouldn’t be compared. A serbian film was one of first movies that ever really brought me close to the point of breaking mentally and it took me a long time to recover from it but now I understand it and it is one of my number one favorite movies and shouldn’t have any movie at all beside it. This one was disturbing too and good

Incredible. Could not stop watching. Gruesome and brutal.

Nothing comparable to a serbian film. Boring, long, acting was bad and directing wasn’t brilliant.

Hard to believe this film had a 30 million dollar budget

movie was shit compared to serbian film, the plot wasnt at all exciting and the girls were just plain lesbians . doesnt have personality in them soo they could get killed all they want. both short haired girl are dumbfucks. the blond could easily kill those mf by using knives but yet she roams around the house wanting to kill herself, couldve help her friend and let herself be killed afterwards. redhead could just stop giving ideas for them to meet the killer just to save the girl who they just meet for 10mins and domt get me started with the black short haired girl, fucker could just kill that killer without her trying to be all savage with her ur a bad soilder speech then getting her sister to get killed too by not shootong him on his head. i hate dumb bimbos like them, would have prefer it to be more about the killers side of view and how he end up making his son do the same shit as him

What happens to the baby ?

ASF is incomparable. The horrendous molestation of an infant on par with Tim Roth’s The War Zone haunts me consequentially. The lesbian scenes were ennui-riddled and inane… A superfluity of hecatomb EUM, grateful x

I expected something else. The violence out weighted the message. The monster gets shot 4 times and still hangs around to do more damage.

I’d say it had more In common with spit on your grave. . .
Lead bad guy was menacing enough but the story was far too short.

Still always good to watch south America movies.. and this was a dam sight more entertaining than say … Flesh to play …

They had so many chances to kill those inbred idiots for example multiple guns trained on them etc. mildly infuriating everybody in this film fucking deserved to die. Still its effed up enough to be enjoyable.

There are EUMs, and then there is the first scene in this film.

That’s quite an interesting movie.

As if terrible acting and an equally bad script wasn´t enough, this film also awards itself with being the most disrespectful one made about our civic-military dictatorship. Let´s face it, the whole dictatorship-related torture deal is just an excuse to make Trauma look meaningful when it simply isn´t. I just wish survivors never watch it because they really don´t deserve to endure this lazy attempt of shocking audiences.

nowhere near a serbian film successor, every single one of the characters make fatal decisions to push forward the almost non existent plot. one of the characters gets shot with a pistol and somehow their whole head explodes, another scene someone gets their whole arm chopped off in a matter of 5 seconds with the equivalent of a pocket knife, and the entire thing feels more like a porno skit than a shock film. spoilers: to sum up the movie, lesbians get raped and murdered, murderer has a bloodline of incestual rape, and random newborn fingering(which literally had no purpose, it didnt even push forward the plot) and i have no idea how it ends because i physically couldn’t sit through the annoyingly horrible storyline

Wow.. Uhm… That was garbage.

This movie was really intensely frustrating. The effects were really well done and it definitely had some fucked up stuff in it but I just can’t get over how incompetent the characters were. It’s hard for me to root for the protagonists when they seem to be actively trying to get themselves killed by the baddies, or (in these cases) just being passive and stupid and making the worst decisions.

what an unbelievablu dumb movie. why isn’t 0 stars an option here?