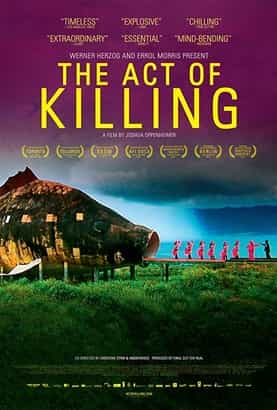 Plot – Spoilers:
In the mid ’60s Indonesia transitioned away from a leftist government. A transition that witnessed the killing of an estimated million communists and varied ethnic groups. The Act of Killing catches up decades later with some of the prominent executioners who carried out the killings. Most prominently featured here is Anwar Congo who considers himself a bit of an artist. He dresses flashy and carries the influence of Hollywood from his youth when he worked as a scalper at cinemas.

Several of the executioners have families now and have attempted to deal with the guilt in various ways. The vanity, pride in their accomplishments and status, ego, confusion and guilt – it’s all there in one of the great documentaries of our times.

Way better than I expected

We haven’t evolved from monkeys yet, in fact monkeys are better creatures to this world than human beings. Unbelievable……..?

All military movies on this site are so good and detaliated ,with a great story.I.m glad to see them.This helps me a lot in my future of military work.I have a lot to learn.And its much better if the movies are with a real history not just for entertaiment,Of course i can learn from books,documentaries ,a lot of exercises etc.I recommend when you have a little time to watch these movies.Sorry if i wrote something wrong in english.Have a great night or day!

And i consider them a piece of art

How is it even possible that this is the first time I am learning about this? The 1965-66 genocide in Indonesia, and the executioners are celebrated to this day. I’m not complaining, it’s just mind blowing