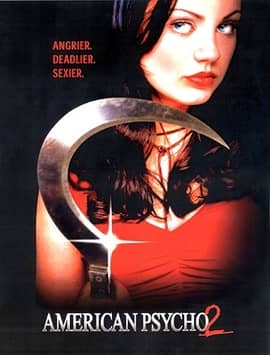 Plot – Spoilers:
A young girl watches her babysitter being killed by Patrick Bateman and proceeds to murder him. She then grows up to be a serial killer with the ridiculous ambition of joining the FBI so she can profile other serial killers.

After a promising opening scene, American Psycho 2 spirals into a caricature of the original. So before we get flamed for posting this on here, let’s answer why.
1. In case you had vaguely heard about a sequel and wondered how it went.
2. For hardcore fans of the original who might anyway want to watch a bad sequel.
If you belong to (2), there’s bad news – this wasn’t even meant to be a sequel and the studio just retitled the film and added a few connecting bits. 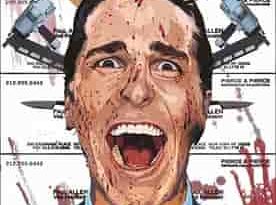 Man, you guys were on such a roll of great films…..

some movies are better off with just being one

i can’t not think of drew’a video abt this

Just noticed the directors name. ”Morgan Freeman”. Surely such a good actor is not responsible for this shit. Hopefully its someone else with the same name.

Didn’t really like the movie at all. The main character’s goal was disjointed, to say the least. Nothing caught me off by surprise or even any subverted expectations, and the part that really boiled my blood was seeing Patrick Bateman’s character completely butchered in an undignified way. Frankly the producers should’ve just stuck to making this a separate movie instead of a sequel, if anyone could even call it that.

THIS IS SO BAD

This is a shitty movie sorry but it’s true.

Not a too bad a movie, a bit of fun, when watching don’t take it too serious and you’ll enjoy.

this one is for the pretty girls, if you dont get it i guees your just not a pretty girl.