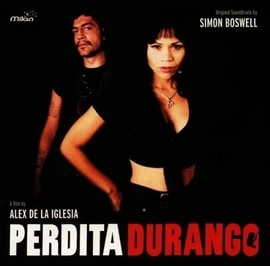 Plot – Spoilers:
Perdita Durango hooks up with Romeo on the Mexico-US border because she’s mostly got nothing else to do, and also because he’s a criminal and an occultist, which she finds amusing. Perdita suggests that they kill an American for the heck of it. They eventually settle on a young couple whom they lug along on their travails involving guns, gangsters and occult ceremonies.

Sometimes, the film plays out like an ordinary homage to Tarantino, but other times makes up with its eccentricities and interestingly funny characters like Adolfo (played by Screamin’ Jay Hawkins) and the perennially mumbling Doyle.

Good crazy action stuff, def a nod to Tarantino/Rodriguez, but Rosie makes me stiff on her worst day. She’s worth the look.

Haven’t seen this one before cus I heard was pretty average and after watching it, just got that confirmed. Shame because is the only movie on this site from one of my favorite Spanish directors. So if you want to see some really great and weird movies from Alex de la Iglesia, those are my recommendations:
The Last Circus
The Bar
The Day of the Beast
Those are much, mush better than this one.. enjoy!

I found this movie to be pretty entertaining. Thanks EUM for another enjoyable evening in front of a screen.

One of my new all time favs! Was effed up, funny, and cool all in one movie – a rare combo to pull off.

This is not the original Spanish version which means it is missing 10 extra minutes of good stuff.

My favorite on this website so far! Such a fun watch 😀 plus rosie is hot. and javier. they are both hot.