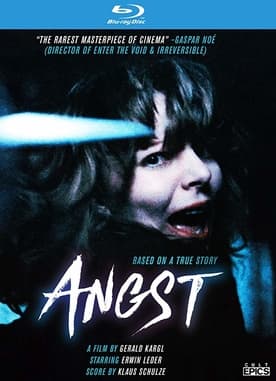 Plot – Spoilers:
Angst is one of those movies you look at the year it was made in, 1983, and take in a sharp breath because apart from the obvious things – the clothes, hairstyles, cars and tone of the film – everything about it seems so current and hip. Unfortunately for us, Director Gerald Kargl didn’t make another film after this.

It begins with a man holding a gun walking down a street with purpose in his face but not in his legs as he tries to enter several homes before eventually finding an open gate. He shoots the old lady who answers the door and is subsequently arrested. Through a series of vintage photos we discover a childhood of abuse and trauma and pick up a little later when he’s released from prison.

Earlier, when asked his motives for murdering the old woman, he replied, “I only had this feeling, that something needs to happen.” This brilliantly eerie single line encapsulates the acts that follow his release.

Angst was based on Austrian serial killer Werner Kniesek whose versions of the killings were more drawn out and elaborate.

This is a movie riddled with fascinating shots and camera trickery but is also memorable for Erwin Leder’s performance – him crawling while clutching on to the girl rather than dragging her is one that stood out for me.

Saw this on youtube a while ago, but it did not include the intro. Great film and genuinely scary. I read the director had trouble getting this distributed due to the disturbing content, and perhaps because it was ‘based on true events’ that happened not so long before it was made.

Not the best film I have seen but not the worst either. The highlight was the dog following the guy around, it was almost comical. I almost felt sorry for him and all the work he did to load the bodies into the trunk of the car only to come unstuck by going to that cafe. Not a really effed up film but it had its moments and I quite liked it. Cheers.

Awesome Flick.
I would love to see something so extreme and putrid made in today’s world.

Lighting is this so damn engrossing

And for 1983 miles ahead of its time.. wonderful camera work and quite believable scenes. Just goes to show Euro cinema has and will always be miles ahead of USA and UK film making .

before watching recommendation! (no spoilers)
this upload is the international cut which i strongly think is worse than the director’s cut. the biggest difference is this has extra 7min 40sec prologue in the beginning. to get the better director’s cut “true” experience skip to 7:40 where you blue and black credits start the movie.

this is the epitome