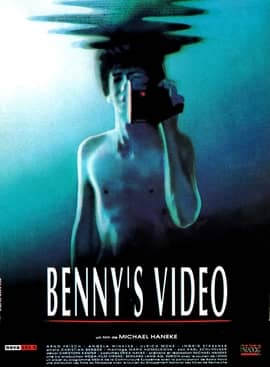 Plot – Spoilers:
Grainy footage of a pig being shot with a captive bolt. This is Benny’s first significant work.

Benny is a teenager living in a wealthy Austrian home and has filled his room with videotapes and a few cameras. He appears to prefer video to reality. So his curtains are drawn shut and instead, a camera 24/7 live records the outside view from his window.

Something more significant is about to happen though. Benny often sees a girl standing outside the video rental he frequents and he brings her home one weekend while his parents are away. He shows her a captive bolt pistol he’d stolen and things spiral from there.

Thoughts on the ending (Massive Spoilers):
It seems unlikely that conscience had anything to do with his decision. Benny’s unpredictable behaviour with the girl and later his friend Ricci at the latter’s home and in class, suggests he is certifiably psychopathic. Through the course of the film you almost sense a growing contempt in him for his parents’ decisions and behavioural choices, and his trip to the police station is probably to spite them.

Random:
If you liked the actor playing Benny, there are a couple movies here, including another by the Austrian master Haneke. 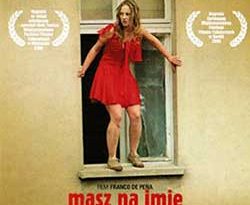 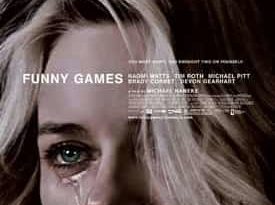 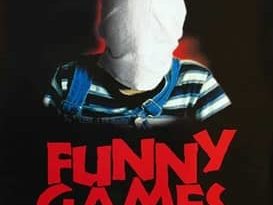 Yo that was interesting, merci
Foreign movie never heard before 🙂

Replying to myself since I just noticed the Miami actor looks a lot like the main character in Funny Games, interesting though

its the same actor! yeah he’s a lil younger in this one – found funny games to be a massive bore tho?

Masterpiece from the best director of our time! Thanks Effedup movies 🙂

despite featuring being a film by Haneke and featuring both Ulrich Mühe and Arno Frisch, I did not enjoy this one as much as I do “Funny Games”. And funny games is one of my favourite films. This one in comparison didn’t really grip me. starts off slow and never really picks up pace, so only 3 stars from me.

I liked this movie. But that poor and innocent girl didn’t deserve to die the way she did. Very sad.

Perhaps, the reason why he snitched on his parents was the same reason why he killed the girl and why he never talked to the principle/school official. He doesn’t want to take any responsibility.
He finished off the girl because she kept screaming and freaking out and he didn’t want any trouble.
He hit his friend because he was mad that he told his teacher about his side of the story.
He recorded his parent’s “confession” before any contempt could grow and did it right after
they had a meeting before his trip.
He turned them in so he won’t get blamed and share no responsibility like a apathic psychopath.
He’s just completely desensitized because he doesn’t separate media from reality.

Not Miami
Reply to  Benyam Getahun

You my friend have just described
Criminal Insanity

The movie is slow and longer than necessary, with repeating scenes. That boy is an organic portal, he can imitate feelings but has none, a complete empty vessel. The parents enable his irresponsible behaviors with the unconditional love covering his ass and rewarding him for his wrongs, when they should’ve just turned him in or disowned him, cos someone like that could kill anyone, unprovoked, in a heartbeat, without any remorse.

very disturbing and left me confused- i am okay with that