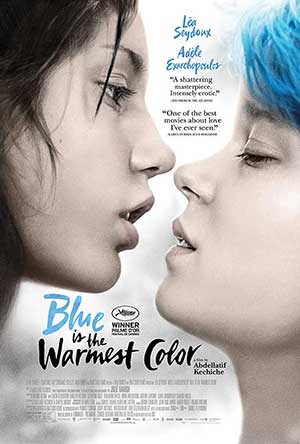 Plot – Spoilers:
Adele is studying literature at school and though she has a close circle of friends, she feels and acts like an outsider. One of the more coveted boys at school likes her and yet, Adele herself seems unaware of her beauty and appeal and goes through her days with a perpetual look of discontent. One day, she walks by a young woman with blue hair and fantasizes about her later that night. This opens up thoughts about her sexuality especially when she meets the same woman during a chance visit to a gay bar.

The first half of the movie builds on Adele’s curiosity, frustrations and eventual acceptance of who she is. In a way, we as viewers join in the understanding and acceptance. With that achieved, the latter half explores a relationship between two people who really are quite different with different ambitions.

Blue Is the Warmest Colour won the Palme d’Or and created history when the Jury awarded it to the lead actresses as well as the Director. And when you watch it, you’ll know why.

Favorite Scenes:
Emma sketches Adele on a bench:
The vulnerability in Adele as they are about to part ways is breathtaking.

Emma’s friends come over for a dinner party:
During the party, it’s obvious Adele is just not fitting in and the differences between Emma and Adele that were evident earlier, now become stark.

Where Emma savors oysters, Adele chews her food crudely. Emma is ambitious and driven, and though Adele has an artistic streak, she carries it lightly and has simple wants from life. Happiness to Emma is success as an artist while Adele is happy just being in love.

So when Emma’s artistic friends come over, Adele potters around like a cook and a housewife. And while she is far from stupid, she feels and comes across as the dumb, ordinary one among the friendly and complimentary, yet snobbish intellectuals. Eventually when Emma and Adele break up, you can’t help but feel Emma was just looking for an out, all the time. 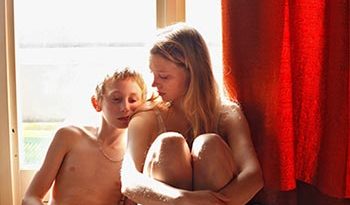 One of the most boring and self-indulgent movies I have ever watched. And way too long. Cannot fathom why it won a prize.

Best of lesbian films, so authentic and emotional.

I am fascinated by the emotions shown in this film, everything seems so self-explanatory and I can’t stop comparing the differences between cultures(my and french) I think this movie was beautiful.

This is a very good movie. I love how Emma and Adele act. It just saddened me because it doesn’t have happy ending. It’s been too long but I am hoping there will be next chapter.

i love the movie. i hope they will have a part 2.

Well, i saw that coming. Because of how different they were. I lost my hope for them getting back together after their meet up in a cafe. But i must say, I wanted Adele to write. Maybe indulge in what she likes. I was 60% expecting her to write a book with the Title “Blue is the warmest colour”. But oh well. I love how natural it was. Its not always about happy endings and first loves. Life is full of surprises. Be it a straight relationship or an lgbt love. Theres no guarentee that it will always work out in the end.

I hated this movie so fucking much, and here’s why:

First off, when the movie starts, Adele is 15 years old, and Emma is in her early 20s. Right off the bat this relationship was already pretty manipulative because 20 SOMETHING YEAR OLDS SHOULDN’T BE DATING OR HAVING SEX WITH TEENAGERS. Maybe the rules of consent are very different in France, but that entire thing left a really bad taste in my mouth.

Which brings me to my third point: this is the most pretentious, self-righteous, self-indulgent and tedious “drama,” and it tries WAY too hard to be seen as “intelligent and deep” when it’s anything but those things. Like I said, you could only show the gratuitous amounts of sex scenes that the movie has, and you wouldn’t miss a damn thing because the story is dull, overly drawn out, and completely irrelevant. The characters have no depth to them whatsoever, and even if they did, there was nothing entertaining about them that would make me care about any of them, not in the slightest. Every character was written as a hollow shell and they all acted like oblivious idiots to everything around them, especially Adele and Emma when it came to their “relationship.” They have no driving motivations outside of boring sex, which is why their “relationship” is flimsy and stupid to begin with. And even their other “driving forces” don’t add any insight or perspective on what these characters are actually like. We know that Emma wants to be a successful artist and that Adele wants to explore literature (or something, I honestly don’t know and don’t care), but these traits are handled so poorly that they just come across as inessential and irrelevant because the characters themselves aren’t deep or developed.

In short, this movie is the worst 3 hours of my life that I have wasted and will never get back, and it angers me that it got so many awards for its “deepness and artfulness.” If you still venture forward even with my warning, you will either agree with me in my disappointment or love it for everything I think it’s not.

So you liked it then…?

I personally think it is going to be boring if you want to see it in a boring way. It’s really just a matter of perspective and one can’t understand its depth if they cannot grasp the essence of realism in a film (which is what the director of the movie was aiming for).

The simple conversation of a friend, a leaf falling on your hair, the frustrations, the feeling of something missing in your life but can’t figure out what it is you’re looking for, even the sex is part of our reality. The movie captures our lives in the most mundane but beautiful way.

I also don’t think sex is the core of the movie, it doesn’t even matter. People have sex all the time because it’s just human nature. Whether it’s with a woman or not, you cannot teach your heart to whom you should make love with. There’s no concrete way on how you should love and how you should feel.

What captured me the most was how Adele and Lea portrayed their characters in the movie. From their press-cons and interviews, they said that what we see on screen is exactly the manifestation of their emotions. Their expressions and their movements were sometimes not on the script because the director wanted them to improvise according to their preferences and to follow what they truly feel. For me that is truly brave and unremarkable.

As for the movie’s core, I personally think it is about finding yourself, discovering who you are, loving people in the midst of all the chaos, the pain of loving someone who is out of reach, struggling to survive another day and losing yourself all over again. Which is pure reality. We experience it everyday, no spotlights, no cuts, no special effects, just diving face first for what’s to come next. Just ourselves carrying on one day at a time. ‬
‪One thing i regret is not watching this film sooner! this is one of the most beautiful and raw films i have seen and I am disappointed that my words might not give it enough justice.

amazing movie, made me realize that i wanna be with a woman. fucking with boys until i find my wife lmao.

The reason I hate every horror movie ever is because people go around and kill other people… and that’s not ok! …………

Blue is the warmest color is so so Unique, I do think that there will never be movies like this ever! because it was just so so real, just like your living Adele’s life. with all the feeling she got with all the disapointments and regrets. its something that you have in real life, during watching it I never feels like Im watching a movie it was just some thing likes Adele’s diary, just like what Emma said. It is still new to the world and I think It will always be!

Probably the only lesbian movie that’s made me leak from my eyes instead of from my penis.

The director of this movie is a scumbag. The actors and actresses say that they were coerced to do the sex scenes while contantly encouraged to drink alcohol. The lead actresses said they will never work with him again. He’s since been acused of sexual assault. You can see how awkward everyone is during the sex scenes and nobody wanted to be apart of unsimulated sex scenes and had all voiced that more than once. I dont give a fuck what you film just respect the actresses.

boring movie but fapped tf to it

Sure it’s a good movie, but why is it here?