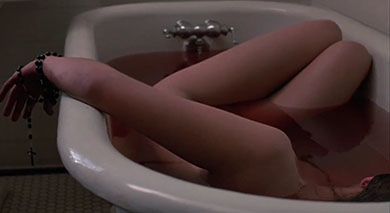 Plot – Spoilers:
The Rosary Murders was co-written by Elmore Leonard and sees Donald Sutherland as Father Koesler, a progressive priest who pushes the boundaries of what the Catholic Church allows without going too radical. For example, he agrees to baptize an out of wedlock child when he realizes the sincerity in the family involved and how much it would mean to them.

His fairly placid existence is soon shaken when he finds himself bang in the middle of a serial killing spree targeting nuns and priests. All the victims are found with a black rosary wrapped around their hands lending a perverse religious angle to the killings. What makes matters worse for Father Koesler quite early on into the movie is that during one of his confessional sessions, the killer turns up and admits his guilt while also warning of more murders. Koesler is now torn between the oath of confessional secrecy (called Seal of Confession) and wanting to save others from being killed. For those unfamiliar with the Catholic ways, if you confess your sins to a priest, he is bound by the faith to never reveal it or your identity to anyone else.

I was raised Catholic and it reminds me of when I was preparing for Communion, the Irish nun tried to tell me about this secrecy of confessions by drawing reference to a movie she had seen where a killer confesses to a priest and he can’t reveal the killer’s identity. A few years back when I watched this, I realized she was probably referring to the Rosary Murders.

Favorite scenes: (Massive Spoilers)
The premise of this movie is the extent of destruction unresolved guilt can cause. The father of the dead girl is angry because he feels the church didn’t help him when he was looking for a way to stop his behaviour and merely told him to “cut it out”. Koesler escapes getting murdered when the killer confesses to him, mostly because of this. Unlike other priests, he identifies the problem – that the killer was looking for someone to help him stop.

This might not be the most well paced and well written movie going around, but it is a complex film that leaves you wondering if the killer deserves some sympathy. Or was he just a selfish wretch looking to blame everyone else for his behaviour without taking any sort of responsibility. What do you feel? Long, boring. Suppose to be mystery ? Thx God we moved on from 80’s.

dude, you always have shitty opinions on movies.

(I think its bc hes retarded)

A bit slow perhaps but interesting.