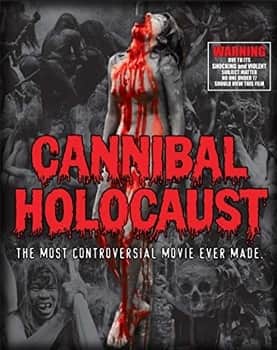 Plot – Spoilers:
A crew of four cocky documentary makers who routinely push the boundaries of journalistic ethics head deep into the Amazonian rain forests to film undiscovered cannibal tribes. We pick up from them having gone missing, and so an anthropologist, Prof. Monroe is commissioned by the broadcasting corporation that financed the project, to follow the missing crew’s trail and uncover what came of them.

Monroe has a couple of guides to help him and they begin by making contact with the Yacumo tribe who are relatively benign compared to the fierce and cannibalistic Swamp People and Tree People whom Monroe believes might be responsible for the crew’s unknown fate.

As we follow the mission, we’re lavished with copious scenes of animal torture and brutal sexual violence as Monroe’s rescue team uncovers darker aspects about the missing filmmakers and the cannibal tribes.

Cannibal Holocaust pretty much pioneered the concept of found-footage in films and is a true masterpiece by any standard with great music, though its shock-value has often detracted from this truth.

Director Ruggero Deodato was actually arrested in Italy soon after Cannibal Holocaust’s release following claims that he had made a snuff movie. One of the major issues related to the infamous impalement scene and allegations that actors had been killed on location. 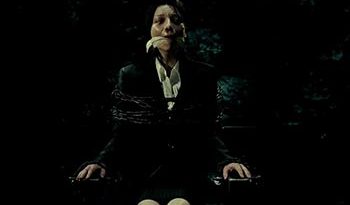 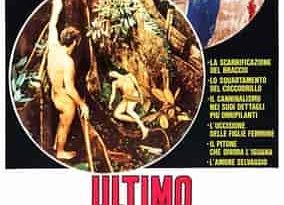 THE best cannibal movie ever! A MUST SEE!

Was okay, definitely wasn’t as bad or good as some have said about the film. The graphic content was over the top but that being said, the over use of sexual violence was boring and the overall feeling of desperation and cruelty made for a good ride. I think from an artistic stand point it’s worth a watching. 4/10

An absolute classic. The performances from the four main actors really work well – as intended, they come across as real assholes. I saw this in the early 80s, and it still packs a punch, but if you are an animal lover, be warned, the animal deaths are NOT faked.

Thank you for that, I can watch anything but hurting animals

none of ur business
Reply to  OJ

chill out not everyone likes watching animals get killed, and the killings in this film were all real unlike the human deaths so maybe people just don’t wanna see it

The soundtrack is beautiful. Hard to link it to the horror but there it is.

jerked off to this

You are a disappointment to the holy cow

This is an absolute one of the best cannibal films out there. A similar movie in modern day would be the Green Inferno.

Yeah, it relly detracts from it in my opinion. Like I would love to be able to argue for the art, but I think there should be limits, and this movie crossed them.

Saying meaningful things doesn’t justify acting against those same motives. Not to mention the treatment of the people on set was pretty awful, Ryan Hollinger has a decent video on it.

hot, I wish we could have seen more of their penises and the third guy from the first half naked.

This is why God has left us

White girl raped and killed by bunch of savages……Yeeee, more of this please.

go back to slavery u nigger coon

none of ur business
Reply to  Niggerfaggot

get a life edgy 14 year old

Fucking classic film! I love all the controversy around this film. Great realism in some scenes, some look so real.

So I have heard so much about this movie. One thing I noticed is it is said there is animal torture. This is not true at all. Have any of you ever been on a farm or in much of the real world at all? Where do you think your food comes from? People have to eat. They humanly kill each animal in this movie. There is no torture involved. Nerves kept the turtles legs moving after they cut off it’s head. It’s bizarre and sad the director got animal abuse charges, but they probably just did that to show they were doing something about this guy. Like one of the comments above, you are quite the unique cupcake if you were offended by the animal deaths in this. The world is full of love spitting dipshits now in days. As kids you should be forced to behead a duck at least once to understand the sacrifice creatures make for you. The funny thing is that we are much nicer in our kills than other animals.

none of ur business
Reply to  Blu Monkey

i think it depends on the point of why the animal is killed. if it’s done humanely for food then that’s very different to just killing animals for fun, or even for the point of making a film. the animal deaths were unnecessary imo

Hello EUM community <3 Today the last lad arrived back from holiday, and we could again watch a movie all the lads together. Very cozy, but the movie was not that good tbh. Soundtrack is a banger, almost cried everytiem. Favorite scene was rock fuck in mud, reminded me of my childhood. Good times fuk yea. So what did you think guys? Leave a comment below, and give the lads some suggestions for the next lad EUM evening
XOXO

@ pussybitch, watch some of the Human Centipede films and then do it irl with all your lads, but go easy on the baked beans.

Hello Zed the man <3 Thank u so much for your nice comment. We have watched the Human Centipede movies and enjoyed them a lot. However, we do not desire to become a centipede ourselves. Have u had any luck regarding this?
XOXO
– Pussybitch Lads + 1 gril

Youre welcome. Send over your 1 girl and I will do a mini centipede with her, lol.

Hi again Zed Man <3 Apologies for taking so long to get back to you. Our gril has been packed and is on ur way. Please give updates on how ur centipede mission is going
XOXO
– Pussybitch Lads – 1 gril

I’ve watched it twice and still got the goosebumps…. the graphic is great and the best part of it all is how they can be looking so real until I thought they’ve been using a real body… gore but never disappointing

my name is deez

They went in their houses trying to force their way of life on others! They deserved every bit of pain they got and more. I have no sympathy for those bastards! Even as a fictional movie, it serves as an example for those who should fight for their way of life!

So Green Inferno is based off of this then?

I seriously doubt it. Eli Roth made TGI as a one off. He also made the ”Hostel” trilogy and has not to my knowledge made another cannibal themed movie.

No it’s based off of cannibal ferox, the green inferno name is just a quinky dink

the cannibals/cannibalism is by far the least “horrifying” aspect of this film. I’d say that the MAJOR pacing issues detracted from the weight of the actual horror of the second half, which is disappointing. There was a lot of room for terror/dread here that was missed, they instead wanted to shock, which, at least for me, was boring. Seems weird to call this boring, but there it is, I found it to be quite a BORE. 2.5/10.

If you like green inferno, this is like the unfiltered film of that. Definitely one of the best cannibal based film.

TheBoy
Reply to  The Eye of Art

But green inferno was based off cannibal ferox not this film, there wasn’t any thing that goes this film to that one other than the cannibalism and the name green inferno

had high hopes for this one but oh welp. This was rather boring, i guess im just more into heavier stuff. But overall it was okay.

If you’re looking for just a good fucked up, gory movie, Cannibal Holocaust is your all around winner. While I wouldn’t necessarily group it as horror or psychological horror (as those have more substance to the story), I would categorize it as disturbing.
It was incredibly messed up with the countless rape scenes and brutalization and murder of animals (which were all real kills, not staged) and I would recommend this movie only if you’re looking for something that’ll make you want to turn your head but reels you back in with the gore.

Suicide rates increased 30% between 2000–2018, and declined in 2019 and 2020. Suicide is a leading cause of death in the United States,3 with 45,979 deaths in 2020. This is about one death every 11 minutes.3 The number of people who think about or attempt suicide is even higher. In 2020, an estimated 12.2 million American adults seriously thought about suicide, 3.2 million planned a suicide attempt, and 1.2 million attempted suicide.4

The best! If you don’t usually watch gory movies and is curious to know, watch this one. It’s surprising how such a good movie you can find from such a crappy genre. The movie is beautiful and grotesque at the same time, a true masterpiece. It has a very important lesson to teach if you’re smart enough to catch it. 5/5 no doubt.

Plus some good music by Riz Ortolani.