Plot – Spoilers:
Divided into 3 segments – Crashes, Suicides and Murders – Faces of Gore gets in an early disclaimer that the gore is real unlike the claimed settings and situations. Which seems about right. For example, all the deaths are claimed to be from Japan but are most likely not.

This is proper gore featuring accidental brain spillages and suicide victims that include (alleged) self-electrocution. You might have seen a few scenes in TOD, but they’re here in more graphic detail. And while FOD, TOD or the Mondo series attempted to inject dark humor to make light of death, this one goes ballistic trying to ironically shock, while mocking death. 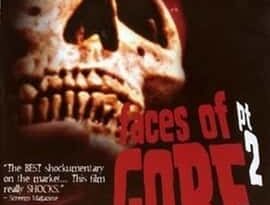 It’s amazing the contrast of what is censored compared to what is allowed. They should have called this winner, scrambled brains.

All of these footages are originally from Thailand, not Japan.

There are actually 3 of these in the series and a special collection titled ” The best of Faces Of Gore”. Still not as shocking as MDPOPE trilogy but its getting closer.

Take a bunch of TOD and FOD. Add 2 girls, 1 cup, a chick fucking herself with a snake, a guy pounding his dick with a hammer, and a little enema play…. and you have MDPOPE. In fact, there’s a movie on here that’s part of MDPOPE… or vice-versa. It’s all Balan footage. He collects the shit, uses it, and sells it. At least he used to…

Yeah Doc, thats true. MDPOPE has a shitload of sexual perversions which its predecessors did not. And, while TOD and FOD show lots of gore, its usually the aftermath of what has happened that they show, whereas MD you get a lot of CCTV footage of things actually happening in the moment ( i.e. Asian speed hump ), which was horrible. I think that one is in part 2 actually. It remains to be seen whether EUM dudes will post it here in its entirety. Cheers Doc, have a good one. Zed.

I don’t think it is needed here either. It’s easily found online if you know how to look.

Yeah there’s no place for shitty mixtapes put together by a dirty nonce on this site.

The time I had found a link to MDPOPE 1, I had right-clicked and ignored the tab for purposes of watching at a later time.
So I am sitting there browsing crap and I hear these weird as fuck noises.. I’m looking around the empty basement, so confused. Then I think, maybe it’s a popup? Open tabs.. See that Vol1 has auto-started. You’ve seen it, you know the first 5 minutes and why I was so confused. Lol Previously, I had no knowledge that eating shit was such a loud process.

Damn, this stuff is good!

Hey,Doc. Have one for me, I cant have booze as I am on the job. Probably the busiest time of the year for me at work. Enjoy yourself and have a great new year. Cheers, buddy. Zed.

the second one here now just waiting for part 3 also

I believe that is Vogels Murder Collection Vol1? Mixtapes have gone to shit. Gone are the days of Crazy Dave and Retard-o-tron. Maybe that is because the clips in new tapes are so easily accessible online and people have seen most of them, but I also find that the hilarity of the originals is gone. They would add in clips that were almost “Americas Funniest Home Videos” humour and it worked. Plus the fun stuff like skater mishaps and Nascar accidents. I searched out these newer “mixtapes” that are “only available on the darkweb” (utter bullshit). I was honestly bored.… Read more »

Yup! That’s the one. A good amount of Vogel’s Murder Collection Vol. 1 is included in MDPOPE. I actually believe He either purchased or stole these clips from Balan. Or maybe vice-versa, IDK. But they’re the same clips, same order, same editing. Making the tapes is fun and easy. Finding the original content is a chore, which is why so many are used over and over. There are only so many people getting smushed, crushed, sliced and diced on video. But it’s how Balan made his money. He snatched up the content, mostly free from what I understand, made a… Read more »

why does real look fake and fake look real?

I’m not sure Dr. Vincent Van Gore is a real doctor.

I am curious, how many of us who watch these are in the medical field? Or in a field like Zeds where you deal with death on a constant basis.
With my experiences, in the medical and social work sectors, I am the one who gets to know the people for a period of time before Lector or Zed deal with them. Maybe these have helped to numb that? I mean, I have been watching these damn things for nearly 30 years. (Yes, I am aging myself)

I believe the scarecrow was outstanding in his field.

Omg Bahahaha It took me a moment.

LOL!! Welp, I’m coming up on 18 years as an EMT. Before that, 9 year as an orderly in a State Hospital for the Mentally Unhinged, whre I was really nothing more then a bouncer/babysitter. But the gore actually started on the job, so when I saw FOD for the first time, which had been out for a while, I lmfao. I’ve been hooked ever since. We actually have “gore parties” where we’ll cue up a few movies, a few bottles, a few joints, and a few grams… (in August, I was actually reprimanded for streaming EUM on the station… Read more »

Why do they make this shit so cheesy…. the added sound effects are cringe.

That was obviously NOT in Japan. Boring as fuck and “dr. vincent van gore” is way too clingy. That’s what’s ew about this movie. 1/5 for the suicides only.

update:
I retract my prior comment. I’m at the halfway point now, and our Doctor seems tad unhinged. I’m sorry to have made such an inconsiderate remark earlier ¬_¬