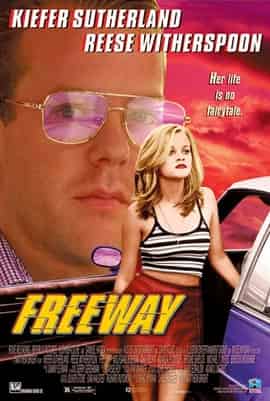 Plot – Spoilers:
Freeway is a modern retelling of Little Red Riding Hood, this time lost in the woods of LA.

Vanessa, a teenager who lives with her junkie-hooker mother and stepdad has no immediate hopes or ambitions for a trash-free existence. But when her mother is taken away by the cops, Vanessa decides being bounced around foster care isn’t for her. So she packs her bare stuff and heads off in search of her paternal grandmother whom she’s never met. But the highways are stalked by a serial killer with a thing for prostitutes and runaways.

Most of the adults in Vanessa’s world seem titillated by her shitty life experiences rather than sympathetic. During the first half of the film, Vanessa’s character has a naivete that borders on the stupid, partly because she is honest. Is she honest because she’s stupid or does she seem stupid because she’s honest? This debate lends an entertaining satirical feel to the classic fairy tale in its modern context, though it does peter out towards the end as Vanessa goes all gangsta.

The memorable opening/closing score is a nice bonus though.

what a great movie to watch right during school

a rape scene would be awesome!!!

Yeah, a home video of you having your arse fucked with razor wire would be top notch.

It seems this guy has caused some controversy, nice

never mind all these d!ckheads chu…. we are all on fucked up movies dot kom … we all deep down secretly come here for rape , death , blood , torture and all the lovely shit like that ( :

Not true at tall ,many of of are here to see obscure Japanese ,European ,small budget independent films ..many of us are not vile little frustrated virgin morons who trawl the internet for rape imagery like you do you saddo !

A scene with someone kicking you in the nuts would be more awesome ! You need to sort your head out mate !

freeway 2 confessions of a trickbaby

Just watched it , not nearly as good but much more effed up.

Using the term based is total cornball.

That Great Movie !! Child kind Vanessa is Not good at studying But clever in survival

This made me laugh so much. Brilliant dark comedy

That was an excellent performance from Reese Witherspoon,what a truly talented
actor she is .Sad to see one of two ‘ Bob’ wannabes in the comments below today

I love this movie so much!! I have been looking for it for years it is a MUST WATCH!!

This is one of my top 10 of all time. The actors blend well and It was great to see prissy Reese as trashy Reese. Don’t get me wrong, she is one of my favorites. Great story and truly something that can happen. As always great job to EUM for this add and this site.