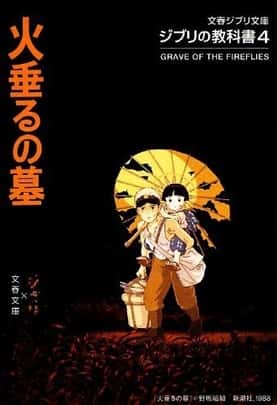 Plot – Spoilers:
Set in WW2 Japan and based on a semi-autobiographical account, Grave of the Fireflies follows the lives of Seita and his little sister Setsuko during the firebombing raids by the Allies on Japan. Their mother dies in one of the raids and the two go to live with an aunt on their father’s side. Father is a navy man and missing in war duty and the siblings now have the arduous task of surviving wartime Japan where food is scarce and tempers are short. Seita is protective of Setsuko and diligently takes care of all her little needs. The two for the most part are happy in their own childish world even when their aunt begins to regret taking on a couple of extra hungry mouths.

Grave of the Fireflies is one of the most beautiful and artistic works ever put out. It tries to focus on the good for the most part but there are enough hints to suggest a darker underside.

Random Thoughts – Massive Spoilers:
The darker underside involves Setsuko dying from malnutrition. There are moments where it is suggested that the urge to survive led Seita, at times, to eat the bulk of food that was available until he realized that Setsuko was dying from starvation. This also perhaps explains why, at the start of the movie, we see Seita starved and dying – he comes across as a resourceful fighter, so he surely would have found a way to survive after Setsuko’s death. But it seems like the will to live had died in him.

surprised this is the only actual anime i can find in the anime-animation section given the insane amount of fucked up anime that’s out there. shocked to find you don’t have perfect blue at the very least, seems right up the alley of this site. (not a request by the way, but i’d recommend anyone reading to see it!)

This movie is just tragic (I mean, duh, what did I expect from a WW2 movie ? :^P), but still, it’s just so heartbreaking, I had to fought back my tears arrgh !!!!
You just have to sympathize w/ thoses kids, their conditions get worse and worse, it’s just depressing :,^[
Thought I have to appreciate the art, it’s well animated (obviously, it’s Isao Takahata).
It’s pretty sad, but so worth it. If you like Studio Ghibli movies, I recommend it !! >:^]

There is an actual movie of this…under same title….see if possible to get it in this site to watch.

I know you don’t take request, it’s rude to impose… but I hope that the universe will cause Thee Wreckers Tetralogy to be available on this site ?.

Also, this anime softens my rock solid heart and caused salty tears to stream down my face. It makes me think that, in times of desperation, people rarely stick together, they would kill over the tiniest garbage just to stay afloat.

One of the greatest films ever made, but one I just can’t bring myself to sit through again. Watched it years ago & still to this day simply thinking about the fate of Setsuko & Seita brings me close to tears.
An amazing film, but utterly heartbreaking.

I cried like a beaver towards the end and almost nothing makes me cry these days. It’s good to feel anything.
10/10.

Los Angeles and New York could have been bombed back to the stone age like Tokyo and Berlin, but the Germans and Japanese had enough decency to fight fair.

One of the most depressing movies I ever seen. I actually did shed some tears and that’s rare for me when I watch a movie.

not requesting butttt totally should anime on this site. fr fr

The fact that this movie is here def says something. I could only watch this once, never again.

why are they so cute 🙁