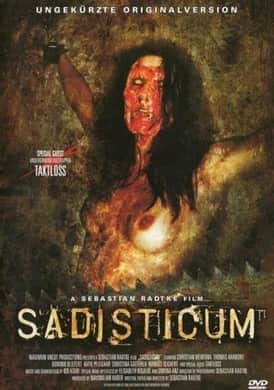 Plot – Spoilers:
A troubled teenager is paid a visit by a schoolmate who expresses an interest in him. Just when they start making out, she mocks his sexuality which enrages him into beating her into a pulp. As he sits around looking at her bloodied unconscious face, he feels a tremendous sexual awakening that later defines him as an adult.

Years later, as a quiet and willing member of society, he has put his violence aside until a mugging attack shakes it out of its slumber. The incident sends him onto the internet to find kindred souls and he soon begins to regard his killing and torture skills as a type of performance art. He also takes a keen interest in a cop entrusted to his case…

Sadisticum doesn’t have a great plotline. In fact, the latter bits are plain silly. But what it is, at a running time of less than an hour, is a neat torture flick that’s well worth a watch.

Hard to watch. Literally its all washed out and over saturated. Apparently they wanted to make a film you can’t see

SPOILER ALERT – Best part is when he beats the girls brains in for calling him a weenie. Wish he got even with the mugger. The director put that crappy filter over the lens which made it look blurry. How arty of him.

It was short but I found it very boring and bland, some of the scenes are off camera, flashing images or just very fake spilling red sauce on the actors. The scene at the start was the only shocking thing on the whole movie.