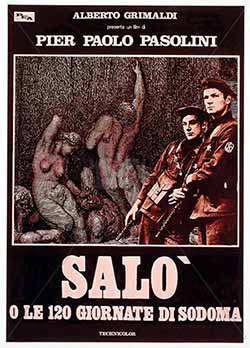 Plot – Spoilers:
Salo is often at the top of any list or discussion on effed up movies, and there’s a reason why. Not only is it a masterfully directed tale adapted from ‘The 120 Days of Sodom’ by Marquis de Sade, Salo is also as disturbing as movies can get without resorting to gore or explicit sequences.

The Sade book was written in the late 1700s while Salo is set during the final years of WW2. In fact, Salo was the name of a part of Italy under the (puppet) control of Nazi Germany. In this political and social climate, four powerful and wealthy perverted men buy 18 teenagers to partake in extended debauchery and perversion in a palace. Joining them are three madams who helped arrange the teens, a pianist and a group of young soldiers to help maintain decorum and also because some of them have large cocks.

The four Masters include a Judge, some kind of President and two brothers, a Duke and Bishop. Before leaving for the palace, they marry each other’s daughters and these girls join them in the palace. They are always in the nude and mostly servile, helping in serving food and similar docile activities.

The Madams who themselves were abused as children, have grown into facilitators of abuse. They regale the men with perverse stories and incidents from their lives in an attempt to arouse them. The Masters are empty and when fleeting moments of sexual arousal arrive, they are desperate to act immediately upon them.

As the days roll by, the perversions get more and more extreme, culminating in a day of violent excess.

If you’re not a coprophiliac, Salo can be a sort of eye opener on connoisseurs of shit as they provide a delicate examination on the varied tastes and refinements of human shit.