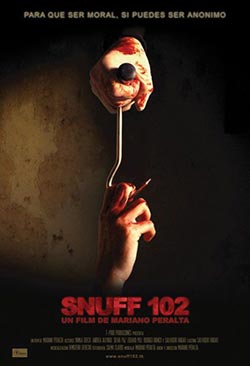 Plot – Spoilers:
Simply put, 3 women are tortured by a masked man for a snuff movie. How they ended up in it is traced in short black & white flashbacks.

Snuff 102 includes long drawn out sequences of women held in captivity. Though these include lengthy scenes without physical torture, it actually adds to the terror when the brutal tortures and murders are executed. These moments are quite intense and include a pregnant woman being kicked in the stomach and stabbed in the cunt, heads and teeth being battered with a hammer and chisel, an almost-dead woman raped and then pissed on. There are also archival scenes of actual tortures and murder which you might have already seen if you’re into this sort of stuff.

While the copy here isn’t the best, the picture quality has been kept deliberately bad to give it an underground, low end camera feel, which sort of works for the atmospheric feel of horror.

That belly popped like squish…
Made me crave Jello! Great post my family and I loved watching this! ?

Just re-watched this after a few months because I remember the main girl being really cute. It’s actually one of the good ones on here. Lots of great scenes

Wow, one of the most brutal snuff themed movies I have seen. Very realistic looking with the grainy footage and alternating between black and white and color gives it that gritty atmosphere. Stay away if you dont like extreme torture bacause there is plenty of this here. Credit to the director and the actresses who played these parts. Thx to EUM for showing this film for the hardcore horror fans. Cheers all.

wow, i wasn’t expecting much but honestly i’d put this ahead of the guinea pig films. thanks again EUM

Very unsettling. One of the few movies on this site that made me look away.

Many thanks to the curators of this site. It is brilliant.

honestly, the worst part for me was when they murdered that pig … i don’t give a fuck bout the people fake dying (even if they really died, i could care less truly) but i cannot deal with any abuse or harm done to animals. otherwise, an okayyyy movie. not great but not terrible.

One of my fav.Thank you

this made me hard

Finally an extreme movie in which one of the victims isn’t a fucking brainless torture doll. Glad to see a movie where the killer gets killed!

EW WHYD HE PISS ON HER

Pretty good I really liked this one. Someone told me its worse than a serbian film. I don’t agree there but its damned close.

An intense and brutal film and definitely deserves to be on this site. The torture scenes are very well filmed. However, for me it was just a torture film as the back story/plot was minimal and so it never evolved above torture and thereby truly drew me into the movie. Hence, 2.5/5 hammers

this one is from my country…..totally forgettable

this is awful, dont waste your time. you literally cant see anything and they use the same 3 second piece of music in the whole “movie”

Dirty and hellish, going to have good dreams tonight

Pretty gnarly even though technically speaking it’s not as explicit? Most of the nasty scenes are shot in the dark but still I think this is easily one of the most disturbing movies out there!, Maybe top 10??? Idk but I think it’s worse than overrated Siberian film in practice imo.

nearly got there but the acting fucked my orgasm