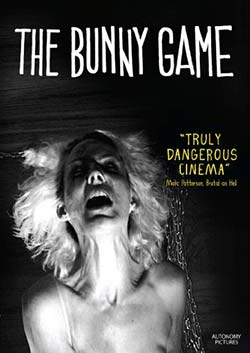 Plot – Spoilers:
Bunny is a crackwhore who moves from one humiliating sexual deal to another. That’s pretty much all her life is when we start following her.

After her stuff is stolen by a client, she is desperate and willingly hops into the truck of an old trucker. They share a high and just when Bunny thinks she could wheedle out some dough from him, the gates of a hellish experience are instead opened out to her.

The torture is more focused on the terror and includes suffocation and branding. The deeper the victim and tormentor get into their game, the more surreal the film’s narrative gets. And when Bunny loses her mind, you aren’t feeling particularly normal either.

Favourite Scenes:
Early on, when Bunny’s knocked out cold, her tormentor prods, examines and plays with her in a bored manner, like she is nothing but a toy or object from his point of view.

Fucking trash worst film i ever saw
Sad that this movie got so much attention cause it sure as hell doesn’t deserve it ???

This was probably the most bs thing I have ever watched certainly doesn’t deserve the hype I came here after being recommended this since I have never been effected by horror/violence movies but this is by far the trashiest thing. I think I’ll stick to Netflix if this is all the crap you can find here.

bullshit it didnt give me wha i came for, too many skips, no story, pointless clips scattered so many time =s throughout movie 2/10 every minute was spent thinking how i could make it 10x better

90% of this movie is waiting for a movie and 10% shitty music. The director obviously thought things that normally get cut. Like 10 minutes of driving. Is what people really want.

The music is black fucking metal and it’s not shitty

I agree, i’m a metalhead, but I think they couldve used metal a bit better than what was used.

I must say I disagree with all of you. I mean first who are any of you to decide what is or is not decent art? If any of you actually owned the DVD you would know that this is actually based on a true story. The girl who plays Bunny was in real life kidnapped and made to endure the torture inflicted throughout the film. It was depicted precisely as she remembered it. And if you ask me, it takes real character and fortitude for her to relive the horror of her experience so she could share her story with people. It’s HER experience, so who the hell is anyone to criticize? Some people are just too critical. They believe that just because they grew up watching a certain structure of cinema that all cinema that doesn’t completely conform to that same basic structure is garbage cinema and thats just bullshit! What makes a movie truly great is an integrity which allows it to be different, a willingness to be perceived as uncool or unpopular, and the fortitude to see it through until its complete. There are no rules in which a director has to follow. If you think its a shitty piece of fucktrash, then locate just half the amount of guts that this director and actress have and go tell a story &/or make a movie of your own. And remember your criticisms here when some two bit jackoff comes along and calls your life’s worth garbage degenerate fucktrash
…..

Honestly I have no idea who you are but your comment blew me away and just loss of words.. I fully agree with you and yes this true story and bunny real experiences and her real story.. no one has right to say shit of what she went through and she went through it and more then what was shown.. it’s not just movie and respect should be shown and much respect to the people who played and acted out this story because unlike them for bunny it was real not just acting.. she lived it

She was never kidnapped, she was never tortured. Did you just make that up?
She was inspired The Muppet Movie, when Doc Hopper kidnapped Miss Piggy. The director viewed it as the flipside to Pretty Woman.

Mad respect for you

You’re kinda right and kinda wrong. People may be a bit dismissive but you’re so damn forgiving that it’s blinded you to the movie you just watched. Not every account of real events is instantly good because there’s bravery is sharing that story. There is a level of impressiveness when it comes to the truth and brutality of the story told in the film but it’s not the beautiful opus you seem to think it is. There’s some dubious acting, some pretentious moments and a lot of editing that didn’t make contextual sense. There’s more to filmmaking than telling a brave story in a stylized way. I think you’re being reductive. This is obviously a movie that means alot to you and because of that, I think you fail to take into account some of the valid criticisms that can be made about it.

It was so fookin’ pretentious I was expecting the scenes in the desert to be mixed in with the Personal Jesus video by Depeche Mode.

Ok, so Ik time has passed and my comment is p irrelevant, but no. This was not based on a true story. Bunny was not a real person and this is no personal account. The actions within the film are genuine as they had no script or forethought, but it is not based on the actual rape and torture of a specific woman. The film is true in its exploitive nature, but saying people shouldn’t criticize based on it being “HER experience” is 100% cap sorry.

Bold move by the actress to portray such ordeal through her best acting. Bringing a true story to a screen and such a horrific one, I’d say well done to all the cast and director. It’s not easy to conceptualize such trauma and then put it on screen. That’s why it’s done in Black and white to makes it look more brutal and feel able. Schindler list style.

This movie hits different when you know the back story. Brandings were real, sex was real and there were no second takes throughout the whole movie.

I love the old man 😉

This is basically The Lighthouse for people with a Fetlife account.

Legit lol’d at the accuracy.
Only The Lighthouse was better.

perfect movie for this site

the ending was boring, i wanted to know what else happened. i liked the soundtrack though 🙂

I thought this movie was pretty good.

@Vic, yeah I agree, I liked it too. It wasnt gory or anything but it was certainly fucked up in a psychological way. I think its intention was to fuck with your head and it did that imo. Dont understand all the negative comments, (or all the spanish ones, you should comment in english so everyone can understand, amigos). Some people dont have class and wouldnt know if it bit them in the ass (that rhymes by the way). Goodbye and Adios.

100% needs more camera shake and arthouse editing. I could almost see what was happening in a couple of shots.
Bonus points to Rodleen Getsic for actaully putting herself through this and Jeff Renfro for looking like fat Michael Gira.

Never seen this until recently but had obviously heard of it.. welljt and shot… Nicely done.. the backstory clearly makes an uncomfortable watch… Needed seriously editing though… Would have worked much better in my non expert and daft opinion as a short but still well made film with no silly rules or normative values.

Not that half bad. Disgruntled.

we need more trucker movies were these cheap sluts get dealt with!!!!! if i did not fear the big consequences i would have done this in real life, to send these dirty sluts with the early ticket to hell.

Could’ve used some gore and more violence, the movie is way better tripping. Getsic is hot af tho and I really appreciate how much of her tits that we get here.

At the start I thought the film/director was ‘trying too hard’ then I realised I was wrong as it became (imo) pretentious. EUM is a great site and I have great respect for the Admin in their endeavours. I’ve been ‘lucky dipping’ through the archives and (for me) I drew a dud. The acting was poor as well. I’m assuming the truck driver was a truck driver coerced into acting. 0.5/5 plastic bags.

Maybe you’ve been using it already, but there’s a Randomize button next to ‘About’

No I didn’t know that. Thank you for letting me know Admin, much appreciated. I’ll continue just going through the archives a page at a time as I’m enjoying doing it. You have put together an amazing film collection, a few of which I own myself on dvd. Again, thank you for providing a brilliant film site.

Kept me watching til the end…
Though it only goes for a hour and fifteen ????

This movie was a very enjoyable watch. It’s delightful to see women being put in their rightful place, as they the inferior creatures that must bow down and cater to a man’s every whim, and if not, they are to be raped and tortured until they succumb. History has shown that women are below men, right back to the very beginning, in the bible, where men came before women, which therefore makes man the superior being, meaning man reigns dominion over women. My biggest regret was the trucker not repeatedly raping Bunny since she rejected his advances multiple times. A decent fap and a half and then started looking into trucking jobs. Very tempting.

A man
Reply to  Dmt_Perception

stfu or I will get my Nazi friends on you