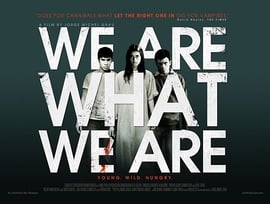 Plot – Spoilers:
The original Mexican version of We Are What We Are.

A Mexican family that diligently follows a ritualistic cannibal tradition are shaken by the death of Dad from poisoning. The crisis isn’t related to their future dining etiquette, but more about who gets to lead the family now.

Alfredo as the eldest is naturally in line , but Julian the more aggressive younger brother believes he can make things happen unlike his meek brother. Mother is not of much help to the brothers in their power struggles as she is still distraught over her dead husband’s preference for prostitutes as sacrificial meals.

Instead it’s their sister Sabina who sets the rules by insisting on following hierarchy in favor of the unwilling Alfredo. There’s also the suggestion of a sexual angle between Alfredo and her which could be cause for some of Julian’s resentment. Eventually Sabina’s persistence awakens certain realities in Alfredo about his sexual preferences and he stalks a gay man with an intensity and fervour that foretells his possible future entry as a serial killer on Wikipedia.

Meanwhile, the cops have found a half-chewed finger in dad’s belly during the autopsy and are sniffing around.

Somos Lo Que Hay takes a ridiculously crazy idea and through atmospheric charm and style creates an interesting watch. Jorge Michel Grau, the director was also responsible for the motor-oil short Ingrown in ABCs of Death 1, if that’s of any interest.

such a fucked up movie, but definitely one you should check out sometime

That’s coming up, but first the original…

Throughout the film I was gripped… Funny Bloody Sexy.. what more does one want. All Spanish films are ace….this was too.