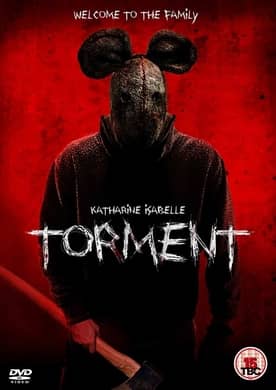 Plot – Spoilers:
A newly created family consisting of Dad, son and stepmom arrive at their home in the woods hoping to bond. Liam the son doesn’t like his stepmom Sarah (Katharine Isabelle), despite the fact that he kinda looks like her. Looking at the kid, you also realize that cloning the attractive Katharine Isabelle’s face onto a male kid would be disastrous.

Meanwhile, Dad is busy being a tryhard father and husband – not exactly the most likeable father-son duo. So you’re not too upset when you learn that the woods they’ve moved into, house an anthropomorphic family looking to add new members.

In case you were wondering, the other Torment will also be added in a few days.

This low budget thriller offers nothing that has not been seen before many times in other movies that have done it better and gorier, still it wasnt too bad, I have seen worse. Not to be confused with Torment 2017. They could not be more different. I have to admit that it was me who first brought up Torment 2017 when someone on this site asked about clown films. That is certainly an effed up film. If it turns up on this site I dont know what people will think about it, but Im sure they will be shocked by it. It certainly stuck with me for a while, but each to their own. Cheers EUM and all the viewers out there.

your site is for me one of the best sites with FREE!!! underground hard and brutal stuff….bravo!

This sound interesting but I am really excited about the other one being put on here soon and I can’t wait. I’ll probably ha ve a panic attack or 2 but not like I wasn’t warned by cool guy who told me about it. I haven’t found it anywhere so it’s cool it will be here soon. But I I do want to watch this one. Have awesome weekend admins and everyone else here and be safe

Straight up comedy. I was laughing my ass off

There’s a special kind of happiness I get when I see this site has been updated, thanks again EUM.

thanks EUM admin for uploading this new movie! It wasn’t to bad. Your movie website is one of a kind. Always entertaining!

Thanks for the new film admins, ur comment regarding the boy Liam looking like his stepmom are funny, when this movie started, his face kinda reminded me of my goddaughters’, lol, made every scene w him cringeworthy for me.

Film was pretty gutter. The chemistry between the husband Corey n stepmom Sarah was decentbi suppose, but the kid Liam had zer∅ chemistry with anybody. Seemed pretty introspective for a ~10 year old too. The stepmom honestly seemed to be the best actor in this film, imo.

Very basic plot, boring cinematography, bad editing. The script was pretty shitty I thought, zero character background/ development in regards to the protagonists and antagonists. Why. Also the dialogue was horribly sparse and stilted. I think the longest dialogue scenes in the movie were when Corey was talking to the Cop, and when the brother mouse was torturing Corey. The old man as the bunny ‘twist’ at the end coulda been neat if *anything* was fleshed out in this movie, instead it just came off as humorous.

Things I found irritating: Who TF keeps a flare gun in their car?! Guess they keep the road flares on their boat then. Both Sara and Liam constantly yelling (and whisper yelling) in the forest, yet trying to evade capture had me chuckling. Smart.
In the beginning when Corey goes to neighbor’s house initially, it’s dusk outside, yet every coinciding scene they show of Sarah waiting in the house it’s sunny thru the windows. The abducted neighbor girl as well as Liam seemingly having no constitution whatsoever, “we’re their kids now because they said so”, ok sure. Those tiny stuffed animal heads seemed to fit everybody pretty well, too.

THE BIG ONE THO: So there’s the protagonists vacation cottage, the ‘bad’ farmhouse of the furries (sry, I had to) down the way, the dead neighbors house thru the woods, but did any of you (or the ppl who filmed this trash) notice that as the cop is reversing his car out of the driveway in the beginning of the film, there is another house RIGHT ACROSS THE STREET!! It all adds up to a 3/10 for me. More cringe and perplexing than anything else, a couple unintentionally funny parts tho.

Throughout the entire movie I was wishing it would go the route of Funny Games, and that the son would die first;)

Eh it was okay nothing new

Haven’t seen it yet but just wanted to ask you to please never stop doing what you’re doing.

ADMIN WHEN YOU POST THE OTHER TORMENT MOVIE PLEASE WITH ENGLISH SUBS OR SO——-THANK YOU VERY MUCH!!!

I liked it. Subtle. Different.

I need to know the punchline. What is a rabbit’s favorite style of tent? You can’t start a joke and then leave everyone hanging. Other then that I enjoyed the movie.

A really bad mix between The Visitors and Hush, and softcore as hell. Not sure why something like this would be up on a site about “effedup” movies, this could be on Netflix.

I like these kinds of movies, its not bad or the best but its good to watch

Not a request, just wondering if any of the Mods/Admin have seen ‘The Strangers’? Bryan Bertino’s directorial debut, starring Liv Tyler. Despite the almost ethereal nature of its masked antagonists, ‘The Strangers’ is based on disparately averred accounts. Bryan obtained his apparent inspiration from the incongruent disquisition ‘Helter Skelter’.

Not in our collection, but seems interesting.

I actually picked up a copy of ‘The Strangers” in a two film combo pack. Not a bad little film at all. I did read it was heavily based on / a rip-off of the French film “Ils” but can’t comment as I haven’t seen the French film yet.

True my friend, give ‘Ils’ a watch when you have the chance, would love to know what you think xx

As always, thank you EUM Admin. About to watch it now.

“Ils” for me was two concepts, home invasion then transitioning into “youth crime” (for want of a better phrase). While an interesting film neither theme was sufficiently developed / explored. The film would have been better just exploring one theme.
The home invasion section of ‘Ils” has a number of similarities to “The Strangers” (imo). However, “The Strangers” explores home invasion in more depth and has a better director at the helm (imo). The relationship between the couple (i.e., beginning scene at the wedding and what has occurred between them) also added to the events that were about to unfold. I found ‘The Strangers” more enjoyable to watch than ‘Ils”.
While in relation to “youth crime” this theme was done far better in “Eden Lake” (also on EUM).
Finally, an invasion type film I found very enjoyable was “The Collector” (also on EUM). As it becomes the ultimate “cat and mouse” film between the killer and the hero in a booby trapped house. A film that brilliantly ratches up the tension as the hero tries to avoid the killer and the numerous traps he has set up. If you haven’t seen it yet its definitely worth a watch imo.