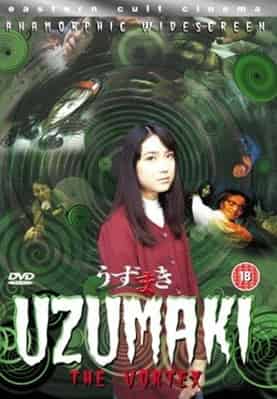 Plot – Spoilers:
Kirie lives a simple life with her father in a small Japanese town. She’s amused and happy with the little things her life has to offer. Shuichi is her childhood friend, and while he’s inexpressive and academic, Kirie hopes to eventually get married to him as the two go way back to tough times in her childhood.

Shuichi is presently disturbed by his father’s obsession with spiral objects and creatures, and feels their entire town will soon be consumed by this horror. Things kind of go down that path.

Also the manga is great

I REQUESTED THIS MOVIE!! Thank you!!!

Ugh, Spiral… why!!? If u dont have the Evil Dead films, the Saws, etc because (call it a logical guess, I could b wrong tho since u got the Hostel trilogy, lol) they’re mainstream horror, even tho u could define em as effedup, then why this:/ It’s literally almost as mainstream as ringu or ju-on, which I bet aren’t on here either for that very reason. Just off the top of my head quickly, what about (screams) Evil Dead TRAP, or Cure, hell even Pulse or Tag if u wanted something mainstream but still very effedup, etc. Or u could go the nasty and fringe af route w Squirmfest, lmfao. Literally sssooo many other Japanese films that would be more fitting for this site instead of this mainstream tween garbage. No offense meant, I say this with love, bc I don’t want to see this sites film selection become a goddamn joke w films like fucking Cabin In The Woods? Just some user input, call it. I digress, thanks either way for the new title.

Spiral as a standalone film is average at best. It’s not that the makers were trying to be edgy or deep and leave it open to interpretation, it’s that it only covers a fraction of the manga story and is condensed, so that’s why it doesn’t make much sense, unless you’ve read em. Just a shitty amateur feel in regards to the shots and acting. Laughably awful cgi sfx, and end of shot screen wipes n fade outs that would be at home in a 40’s western film, which r absurd for a horror film. Gives it an irreverent goofy feel, like they were trying to make it seem like a bad made-for-tv special.

As a standalone film for someone who knows nothing about the story or manga it’s average I suppose, but if u know anything about it then it’s very subpar, like borderline shitty. If u liked the story or want to know more, I’d encourage u to check out the manga, it’s pretty badass, and it’s available all in one book for cheap too. Adult Swim is releasing an anime version of it next year as well. Thanks:)

Manga is way better read it like gah dahum this movie was okay but a lot more stuff happens in the manga and its more “organized” into chapters. More creepy and cool looking so read manga 100%

It looks OK for an adaptation of a story that is too weird to begin with, I liked it more because it was part of the rise of asian horror in the early 2000s and somehow I have nostalgia for that. The guy that plays Shuichi sucks as an actor but the make up for the character was great, didn’t expected anyone to look like those creepy thin dudes that Ito draws. Some of the other characters were kind of silly for the story but Ito also makes wacky stuff like Soichi’s Diary of Curses so I let it pass.

The manga is way better! Don’t like the movie tho

I love the manga, but this movie is a crappy piece of dogshit. I hope the Adult Swim adaptation is better. This movie just doesn’t capture the tone of the original.

I feel like at least some of these would be considered helices, rather than vortices.

Japanese are the best when it comes to horror movies. The indirect thoughts and silly music make the scene even more terrifying. They don’t have a specific entity that represents horror, that’s what makes it special.