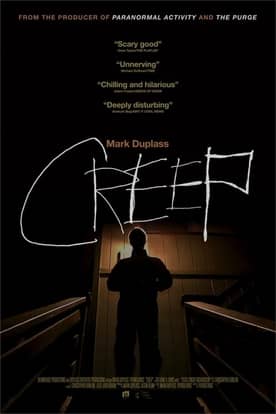 Plot – Spoilers:
A cameraman, Aaron drives to a cabin in response to an ad calling for a day of filming. He’s a bit smug, expecting to meet a mature lady looking for some filmed fun. But instead it’s Josef, a man dying of cancer. Josef’s wife is pregnant and he wishes to record a vlog for the kid, in case he doesn’t make it.

What begins in a weird bathtub soon tailspins with Josef’s behaviour increasingly bizarre and childish. Aaron feels he’s dealing with a very lonely man and indulges him. Besides, he also needs the money and isn’t entirely honest himself…

Creep falls into the jaded found-footage genre but is surprisingly entertaining despite the lack of obvious violence or perverse indulgence.

Random – Massive Spoilers:
In his final conversation, Josef refers to the caller as buddy. He’d earlier told Aaron his child was gonna be named Buddy. So a lonely man with unfulfilled paternal instincts?

If you enjoyed this, you might want to give the darker Tin Can Man a shot.

I thought this one was already on here.

Nice choice admins! (Interesting you’d recommend Tin Can Man if u liked this film, I can see why tho since both films have that weird cringe wtf-ness. Meant to post a review for that one, loved it!!)

One I’ve seen a couple times that I’ve enjoyed, so I’ll keep it brief;) Really liked this film overall, esp considering it was found footage. I love FF style films, but I’ll readily admit most are average at best. Loved the ending, as well as the overall cringe factor of the film. The sequel was decent as well, albeit not as good as this. I’ll give it a sold 7.5/10. Worth seeing

Not to be confused w the horror film Creep about the chic in the London subway, which was a mistake I had made at the used DVD store, lol.

Saw this back when it first came out and laughed at it. I like Mark Duplass but it just seemed really cheesy and forgettable. Since then I’ve seen it appear on many lists for decent horror, then saw it appear here and figured I would try again. Eh, still not feeling it. I did enjoy it better The second time but it’s just so unbelievable. No one would act like Aaron and do, or not do, the dumb shit he does and doesn’t do. I’m glad I watched it again but will not make it a third time. Nor do I intend on watching the sequel.

This movie definitely helps if you have the ‘hiccups’. Overall, not a bad Snuff film. Thanks EUM!

Great movie! I’m not a big fan of the “found footage” genre… but I respect what it is: super-low-budget, maximum profit. Capitalism at it’s finest. Sans all the special effects and tricky camera work, the success/failure of these films rests on the shoulders of the writers/actors who will definitely make it or break it. This one… they most certainly made it. Everything about this movie was a winner… except for the title. It should have been “Peachfuzz” IMVHO….

Good one. Bad guy is super annoying but plausible plot.

He reminds me a bit of my husband.

for the longest time after watching august underground, despite being the steaming heap of shit that it was, i had to admit that as far as found footage realism goes it was the best i’ve seen. thank god i don’t have to say that anymore. the acting, the pacing, the details with how the different characters handle the camera, creep is easily one of, if not the greatest of the genre to date. what a fucking breath of fresh air dude, thanks EUM as always