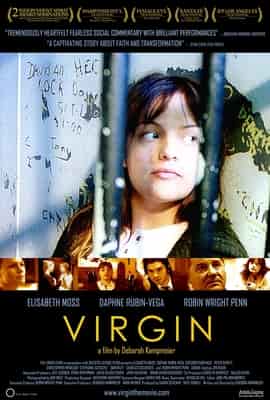 Plot – Spoilers:
A small-town 17-year-old, Jessie is at odds with her ultra-religious Christian family and community. She rejects Christ as a symbol of the male dominance she encounters around her and instead strives to be independent, making her own money delivering newspapers. She even finds ways to buy her own booze without depending on the boys at school. Her rebellious traits alienate her from her family and the boys in her community except one, who rather sees her as one to be conquered.

But there’s another side to Jessie. She’s obsessed with Shane, a popular schoolmate, to such an extent that it almost eschews her feminist views in favor of a more traditional one – to just be his wife without personal ambition.

There’s nothing much else happening in Jessie’s life apart from indulging in petty shoplifting and being kind to a crazy woman who’d lost her baby.

But her world is about to be turned on its head. Shane fucks her when she’s passed out, she gets pregnant, and he pretends it never happened. Jessie tries to convince herself and everyone around that she’s a contemporary Virgin Mary carrying God’s child. But her community never considered her an equal and so now, shit done to her doesn’t even count.

Random Thought – Massive Spoilers
When Jessie offered herself to Shane, she pleaded with him to tell her he loved her. In an ironic twist, Michael is the one to finally say the dreaded words, as he rapes her helpless pregnant body.

how is babby formed? how gril get pragnet? yeah i enjoy these oldschool movies, please upload more

Man moss has been a boring actress since 2003?

Very good movie although religion makes lunatics out of people…

Hey admin, Najam here,
I was told you are a great teacher at EUM !
Introducing Seligman’s Theory
is a bold and generous effort on your part.
While Virgin seemed like a wandering movie it suddenly
made a light bulb go off in my head –
broken human = learned helplessness.

I loved this movie. Thanks EUM!

The comment section is rather quite entertaining, damn near fell off my high horse reading some of the shit posted on here, pretty hilarious honestly. I came here to watch a movie but found myself reading the comments a good while before watching a movie. Good on you admin for not censoring free speech, even though racial slurs are used, though I do not use them myself as I am not white nor black. That said, people who have to resort to using racial slurs show just how immature they are, incapable of intellectual discussion and debate, and clearly 9 times out of 10 lack the balls to say it to one’s face, hence the term ‘keyboard warrior.’ Anyway, good movies like always. Please try to upload the Belarus film Come And See, that’s a really good but fucked up movie I think people will seriously enjoy. The Tin Drum and Soldier Boy are good ones too that are pretty twisted. Anyway, keep up the good work!

Watching Virgins brings into focus a personal problem
search
“megan koester OK, So I Have a Drinking Problem”

Jesus, I miss adulswin streams “The Perfect Women”
No amount of airconditioning will fix the problem . . .

Would be nice if there were more comments about the damn movie and less of this dick-size competition!

U ALL NOW KNOW WHY AMERICA IS SO FUCKED UP JUST LOOK AT THE SHIT THEY BRING OUT NO WONDER INCEST IS MASSIVE IN U,S THEY LOVE TO FUCK THERE SISTERS AN MOTHERS

Geez. What’s all the fuss in the comment section for? This movie is weak. Warning sign for any movie you see with these 3 words in the credits – Robin Wright Penn. 2 stars max. WAY too long!!

I was going to watch the movie, but the hilarious comments and discussions gave me a bigger distraction ????