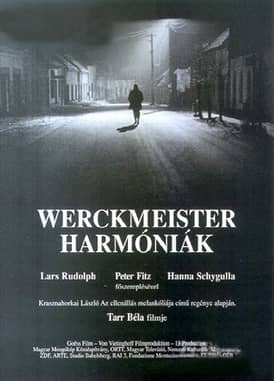 Plot – Spoilers:
A young man Valuska lives among older folk in a small Hungarian town and does odd jobs while also being helpful to the elderly people that need it. One of them, Eszter is of the firm belief that Werckmeister’s theoretical principles are flawed and the harmonies in music, imperfect. Valuska has a thirst for knowledge and education and is respected by the local drunkards for the things he’s gleaned from hanging around intellectuals in town.

The town itself is abuzz with news of a circus rolling in and the mysteries it offers. While Valuska is simply wonderstruck by the arrival of a massive stuffed whale, the men in town are more interested in a deformed man known as ‘The Prince’, with revolutionary ideas that promise a vent for their frustrations.

Werckmeister Harmonies is a surreal experience in black and white with stunning night-time lighting and mesmerizing long shots and music if you’re willing to allow yourself the patience for it.

Many thanks admins! I was randomly searching for this film online and was surprised to see your excellent had it:) I musta missed it before, as I had been wanting to see it for quite a while now, bc I absolutely loved the Turin Horse, by this director as well.

A masterwork of film. Many ppl view films w the sole intent of killing time, or wanting to feel something from said genre, without really realizing there r films out there which can b so much more, that are true art in the purest sense, much like the artists painting. This film would b an example of that.

I feel that this film was an allegorical poem relating to not only the futility of political movements, but the futility of RESISTING one as well, by not realizing all r bad in some way. Our main protagonist János is portrayed as literally the only person left with any spirit in the town, trying his best to help all around him, and wanting what was best for the town as well. The free thinker, if u will.

Relating to the mobs, I feel as if the director left them silent for the most part so the viewer could be caught up themselves in their movement by not thinking about it and not knowing WHY (like the journal said), just as the citizens were, the viewer marching silently along w their masses. Imo, when they rioted and attacked the hospital, they were in essence attacking themselves, bc they themselves were helpless just like the ppl in the hospital. Then when they saw the naked old man they realized they were as helpless and hopeless as he, and retreated. I liked how they portrayed The Prince as well, playing the part, very obviously, of a communist dictator, in relation to what he spoke of/ his intent when he was overheard, finally free of the circuses chains, and able to incite the masses.

In the end when János was committed as a political prisoner to the asylum, this specifically was what lead me to believe the pointlessness of it all, from the systems themselves(town/ppl torn apart), to resisting them and the uprisings(János committed as prisoner). His uncle finally realized all this at the end staring at the whale and the destruction around him, his life too, broken and relegated to a shed.

Just what I gathered from it.

Perfect acting, cinematography, gorgeous shots lasting minutes long, done in single takes (which is incredibly hard to shoot perfectly), excellent score, deep allegorical story yet told almost poetically thru the silence and sparseness of it all, truly moving and poignant story/outcome, incredibly sad actually. A perfect example of when less is so much more.

11/10 in my book, meaning one of the greatest films ever made, should be seen by everyone in their life at some point. This film would b fitting for those lists reviewers make, like ‘100 greatest films of all time’ or ’50 films to see before u die’ etc etc. Hence the eleven, bc it was better than a lot of the ‘best’. A truly perfect example of art, told thru the lens.

Great films and wonderful service you are providing, but is it necessary to keep your website address on the screen at all times? It really detracts from the viewing experience. I assure you, no one will forget your website if you take it off. If you continue to provide such a high caliber of films, obscure and otherwise, you will become one of my favorite websites and I will never forget you…but only if you remove that damned supertitle. Thanks for listening.

too many people here think that they need to write film study essays
im all for talking cinematography, editing, sound etc but if you start talking deep meanings u r up your own arse

I watched this when it was first posted, and just re-watched it now. Not sure why, but I want to say that this is the greatest film ever made. I cannot really explain WHY i feel that way. Some of the scenes in the second half fall flat. But taken as a whole, this film resonates to my core in a way that no other film ever has

Absolute masterpiece! It is a stunning and engrossing film. I watched it 3 times in a row and never felt bored at all for even a second. It is that poignant and endearing. Tomorrow I plan to watch this film at least 3 times. If you feel like taking a nap never watch this film. You will feel super energetic after watching this.

evrythng here is a mindfuck one way or the other.. wow
this reminded me of stalker, but the meditation felt more unsettling than elevating. also great score for a movie with such bare minimun sound.