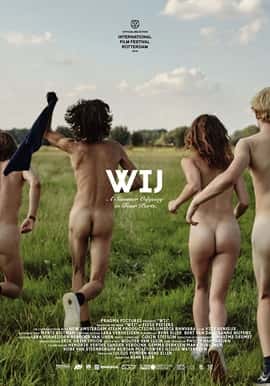 Plot – Spoilers:
Eight teenagers spend a Belgian summer trying to earn quick money while indulging in sexual abandon and increasingly perverse behaviour. All this under the guise of unshackling themselves from what they feel is the construct of reality.

Wij is thematically similar to Rivers Edge, but also quite different. The copious display of flesh, music choices and sunlight, attempt to distract the viewer from the fact that they are basically watching assholes in action.

For some viewers, a startling point may dawn – even if you’re an asshole now or have been one as a teenager, as you grow older, it becomes increasingly difficult to sympathize or even empathize with other assholes. And this film proudly stars a bunch of them.

-European directors: Let’s put some people naked and real sex in this film!
-Audience and critics: Wowow, a classic, cult and genius movie!

Excellent movie based on a real story…

I like that a politician gets screwed and sent to prison. I wish that several U.S. politicians, both democrat and republican, would get life in prison for their crimes. The one thing that would have made this movie a 5 star movie for me is if Thomas and Simon got into a grizzly, bloody car accident at the end and they both suffered for hours before perishing.

I did beat the meat all movie long

I came for the movies, but I stayed for the priceless descriptions on every film. lol

I can’t relate to rebellious privilege. If REALITY is a construct to escape from for white teens, because they just simply can’t deal or refuse to deal, then that in and of itself is the ultimate expression of privileged. Like seriously, get the fuck over yourselves, fucking brats! You’re just anti-authority – there are people in the world dealing with real issues. My black ass would’ve been arrested 20 times and shot dead 5 times for HALF THE SHIT these kids did around town. Like seriously, where the fuck do they get off exercising “reckless abandon”?

This is one of the worst delusional dumbfuckery I’ve ever seen. I think it just made my top 3 on the list worst movies of all time, only losing to Cats and Alien vs Predator II

Add sex in a movie with everyone fucking like dogs and people will want to see it. It’s one of these movies.