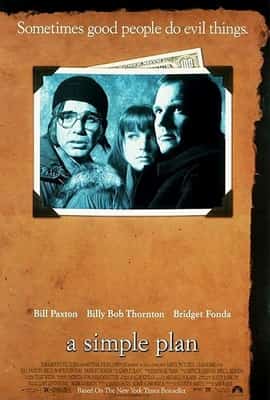 Plot – Spoilers:
Hank has a life to look forward to and is a little smug that he’s found happiness as was defined for him by his dad – a wife, the respect of his town and even a kid on the way. He’s chosen to remain oblivious to certain family-related facts because it’s been convenient to do so. Family for him now, is the one at home. Everyone else, whether it’s his mother’s grave or his younger brother Jacob, are mostly obligations that tie him down from a sense of duty.

Hank does have some sympathy for Jacob who’s a bit slow and a kissless virgin, but hanging out with Jacob and his buddy Lou is usually a painful chore. One such chore leads the three to a crashed plane hidden in the snow. Inside the plane is a pilot being pecked apart by crows and a bag full of cash.

The bag turns out to be a Pandora’s box unleashing suspicion and distrust among the three, fueled by Hank’s wife who has a clear plan for their future. Along the way, Hank grows to understand and care more for his brother. But over 4 million in 100 dollar bills is kind of heavy and can smother most people’s sense of morality.

Jesus what is happening to this site?

This movie is great. The real question should be “What happened to Bridget Fonda?” Have you seen her lately? Real scary. Excellent movie. I totally love this site. Some movies like “Henry 2” or “Kill By Inches” would be really awesome on this site and they are much more effed up than this one (hint – not a request). EUM is the best. I’m glad there is a website with all these movies on here. I feel totally lucky that I found this awesome free website.

Hey RIGO – Let me guess – you are a borderline retard. OK – I give up numb nuts. How do you want me to respond to “DO KNOW ANY WEBSITE LIKE THIS?” Still trying to pass the test for the 3rd grade reading comprehension skills test I see. Honestly RIGO – why would anyone write a retarded comment like yours? It’s fascinating how moronic your comment is. Did you bang your head while you were wearing a loose hockey helmet?

and I’ll Take your moms link

why u so mad lol

She dropped out of the industry, loved her in Singles. All that matters is that she’s happy just being a family person, who can blame her?

Pretty sure ive been through every good movie on this site

Great book. Great movie. U dont need blood and guts to be fucked up. Psychological films play on ones mind and that can be just as effective for some ppl. Also some folks may enjoy a change from gory slasher films once in a while. EUM caters for all with different tastes, so if its not for u, watch something else.

What’s happening is that EUM admins have been broadening the catalogue to include movies that possess a more subtle sense of fucked up-and some of those movies happened to make a significant blip on the mainstream radar. Viewers who think fucked up is all gore and splatter (or openly terrifying movies like Martyrs) are missing the point. You sound like the kind of guy that would fit in quite nicely with all of the others that still can’t figure out what makes Godflesh just as much a Grindcore band as Brutal truth or Anal cunt. In fact, I dare say that you’d probably turn your nose up at a mainstream movie that has inbreeding/aftermath of incest, accidental death, Sexual violence against Men, Torture, Murder, and PTSD for no better reason than the fact that it has some truly great, well known actors that turned in outstanding performances and features some of the most beautiful outdoor scenery in film history.

So in conclusion, depth often = fucked up and some ppl would do well to develop enough depth to recognize that or go watch some G-rated channel that has no fucked up movies on it at all (like Fantasia, The Dark Crystal, or maybe the world’s most bizarre fairy tale…Written by a literary genius/Pedophile).

Cool story Bro… you have some good points, and others you mention are just ranting. Effedupmovies.com- people expect well, effed up movies. Things from around the world, or stuff that is either banned, hard to get, never heard of, only in Europe, etc that’s effedupmovies. Tales from the hood? Seriously? I really do appreciate the admins and every thing to do and upload, maybe they are browsing their horizons? Domain name change in the future perhaps?

great film but not effed up

Thank you for the upload… Btw, there’s a film with a similar theme, “three roommates”, “a huge amount of money” called Shallow Grave (1994) and is more effed up than this.

Noooo Jacob, the only character I cared about in this movie !! :’^(

I love Sam Raimi! (Hint ;)) Tobey Maguire is and will always remain my uncontested favourite Spiderman 🙂