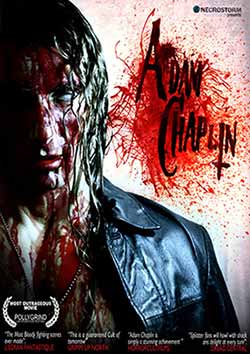 Plot – Spoilers:
Adam Chaplin is a gore-fest with revenge as an excuse for it. Set in the dystopian Heaven Valley, Adam Chaplin’s wife owes a disfigured crime boss Denny some dough and having not paid up on time, she is set on fire. Adam has no choice therefore to summon up some kind of a demon that is forever perched like a figurative monkey on his back and which gives him certain powers. His fists are pure power and there are some enjoyable scenes of hyper-speed battering of people’s faces as Adam goes searching for Denny. To add some drama, Denny sets loose a former military guy on Adam to finish him off before he can get to Denny. The gore is also given a breather with some back-stories detailing Adam and his wife’s relationship and how Denny came to be disfigured.

Many of the violent scenes which include one of Denny’s son’s being impaled appear to have been influenced by anime/manga action sequences. There’s lots of gore, in fact, bucket loads of it at times and Adam Chaplin was described by some at the time of its release as one of the goriest movies ever.

Absolutely brilliant film. FINALLY a shot-on-video movie that doesn’t suck. Could be the bloodiest movie I’ve ever seen as well. This film is for gore freaks and those who appreciate the darkness in life. It won’t be for everybody but I absolutely loved it. The director who pulled this off is to be commended.

As always, thanks to the folks at EUM’s for posting this. I had never even heard of it until seeing it here. Many thanks…we all appreciate what you do.

Master piece of evil and darkness love it

Where do you find all these wonderful movies?!

Are you going to eat his ass first, you annoying little attention whore?

This is brutally fantastic..

Work of art!!! The perfect movie for this site. I always that that the Japanese make films like this one… surprise that it was made in Europe.

I enjoyed the effects and had a good laugh at times. Sadly the gore is just there for the gore. As the characters are just some objects it doesn’t had an effect on me. Just some stupid objects gettin’ ripped apart.

@suckmydickbitch: Mike Ehrmantraut is identifiably Mikel’s incognito non de plume. I observed his commentary upon other films, seldom does he opine or review, in lieu this commoner astuciously utilizes the synonymous derogatory aspersions with piscary simulation.
Basically, it’s the same individual trolling comments to infiltrate his homosexuality abhorrence…
<3 Matti

Haha!!! You’re nowhere near as smart as you think you her, sugar britches. Actually, without the thesaurus app you’re just another dumb fuckin cunt. Just a run-of-the-mill place to deposit semen.

It seems I’ve moved into your narrow little brain and will be living here rent-free.

@Matisse Famke, I figured that out too, he doesn’t do a good job at hiding it. He’s just being a coward with using different names. I also agree with you on his homosexuality abhorrence, he just wants to be fucked by a guy so badly but won’t admit it so uses hate instead to hide it.

Bonkers… Like really mad.
Not a bad watch
. Very cartoony and wildly OTT.
Bit of escapism for a early still cold Spring night.

The director’s crew made other movies just as mad as this one. Check em out

This was so insanely awesome!

I love this movie :]

Its like a mix of sci-fi, horror comedy with buckets of blood. Interesting revenge type film unlike any I have seen before. Pure escapism. When I watched this I was reminded of films like ”Evil Dead”, ” Braindead” and others with OTT gore. Well done imo.

that was the most powerful slap i’ve ever seen. my dude literally slapped him with his impaled son.
majestic.

omg i didnt want this film to end, best movie ever, might even watch again. kinda reminded me of tokyo gore police/vidoe game sooooo much gore. more like this please, i appreciate all u do, i love this site

That’s my favorite line in the film.