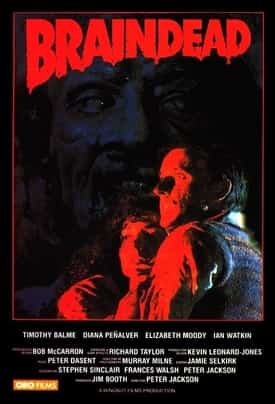 Please read below for more info on the two cuts

About the Two Cuts:
1. Braindead/Dead Alive has many versions and cuts. The first one above is the longest at 01:43:11 and includes material from a bootlegged copy. These extra scenes are more plot-related and not really censorship-related. As in, you really won’t get much extra gore by watching this.
Note: This version has an audio problem – a lower-volume second audio track can be heard in the background in some places.

Plot – Spoilers:
The big daddy of splatter-gore and comedy-gore, Braindead shoved in as much of it as was possible at the time with existing technologies.

The story is sort of fairy-taleish – set in New Zealand, a storegirl Paquita’s grandmother prophesies that her prince-charming will lead her to everlasting love. The prince charming here is Lionel who lives in a mansion with a pompous mother who bullies him. So Lionel not only has to overcome his mother but also prove worthy in Paquita’s eyes. Help comes in the form of a mutant rat-monkey that was smuggled into the NZ zoo from Sumatra. The rat-monkey bites Lionel’s mother and she begins transforming and biting everyone possible. And so on.