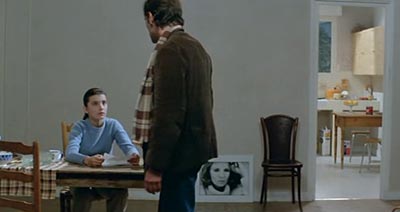 Plot – Spoilers:
Remi is a cynical depressed pianist who works at a posh French restaurant and is married to a small-time model Martine who has recently taken up lingerie shoots to offset their precarious financial situation. Remi is hitting 30 and is convinced he’s a failure with no hope of redeeming a career that was full of promise at a younger age. Their marriage too has hit rock bottom with the two hardly ever seeing each other – as Remi puts it, When I get home at night, you’re asleep. When you awake, I’m asleep.

Martine has a 14 year-old daughter Marion from a previous marriage to night club owner Charly. Marion has been raised by Remi from the age of 6 and so when Martine suddenly dies in an accident, Marion opts to stay on with Remi despite Charly offering to care for her. The Remi-Marion relationship from Remi’s point of view initially appears non-sexual. He looks at her fatherly and sees in her innocence, someone who cares and acknowledges him and his music that few give a damn about. But soon things get weird and complicated when Marion unconditionally expresses her love for him in a non-daughterly way….

Favourite Scenes:
1. Remi has taken Marion moving out badly and is sitting lonely and miserable in his apartment when she returns. Can’t even be miserable in peace is his state of mind when he hears the bell ringing. The fact that she has chosen him over her biological Dad gives him a new zest for life and he even perks up, especially when she asks him to fight for her. It makes him feel like a man again and feel wanted. When Charly arrives to take Marion back, the two get into an awkward fight that’s funny; but what’s funnier is when they sit together, bruised and hilariously sheepish as Marion patches them up.

2. When Marion unburdens herself to Remi:
Over the course of the interactions where Marion lets Remi know about her sexual urges, his primary issue is not that she is like a daughter whom he therefore cannot imagine being sexually attracted to. Rather, it’s about their age difference and what Martine, if she were alive, would have had to say about the relationship. In fact, just before Marion tells him her feelings for the first time, you can clearly see him checking her out as she walks away from his bed. So it’s fairly possible that Remi had been attracted to her as she grew up but suppressed these feelings out of guilt and shame.

The first two times when Marion talks to Remi about her feelings are separated by a short scene of Remi playing the piano with uncharacteristic wild abandon, which is kind of funny.

Great film, the acting really helps sale the story. The premise makes it seem like it would just be squicky, but it’s actually very sensitive and beautiful. I couldn’t help but feel for Remi and also Marion

I think that some of you are missing the point here. The film is about man who has sexual relations with a child. Throughout the movie it clouds your moral judgement because it seems that the girl is driving the relationship. However in the very last scenes it becomes abundantly clear what is going on. Moral judgement reinstated.

I could see from the beginning when he was so obsessed her not getting a hold of him, picking up the phone calling her….it’s one thing “normal” step parent, to be healthy obsessed with how her transition is going her health and just happy to talk to her, not taking all their now loneliness and all that guilt on a 14 year olds shoulder, in a sense manipulating and twisting in what should just be school and “normal” 14 year old responsibilties and adding the back false thoughts of them needing to substitute the intimate position of the lost parent….

I think we all very sensitive to who is 18 who is not. She was ready for love and the transition from being a child to being a teenager has been already started. Legal age should be 15 not 18.

Get over yourself you pathetic keyboard warrior.

I like your username, hope you live up to it

do you know that when gays have been fighting for their rights there was a tendention discovered; people who were the most anti-gay happened to be gay and wanted to do everything against gays just so they don’t be associated with the community. I’d say it is extremely interesting that you’re so captivated to hate pedophilia, you must spend a lot of time thinking about sexual relations involving underage people, right?

The movie is about a young girl experiencing love, sexuality and obsession for the first time. Remi is handling all this all very sensitively, to an extend. The movie is about the taboo of adolescent sexuality, just like Lolita was and still is. Young girls grow to be sexual beings much earlier than boys and they experience it most of the time in most brutal ways… People who throw accusations at people here who try to understand this social dilemma and watch this movie from that perspective is downright stupid and says more about those who accuse then about those who acknowledge the issue.

Well read some of all morons answers here its obvoius some “realy” r .
But ok , sensetive to 18 nope , who say its 18. Sensetive to legal low age yes. 18 is In America and kinda supriced Thailand . In Norway its 16 ,sweden 15 , Spain 13 – And for those shout out pedo to ya just for question some …. The real “pedo” pope vaktikat its 12…

Also i was in carribean yea was 16 . But as long still past 12 it was just a fine . Sure guess worked for the locals – A fine like a month pay for them .But a foreigner mabe 1 weak , a rich one few day … what i in basic try say . For a “pedo” with cash who realy wanted he could kinda with that law fuck a 12 year + and pay the fine with a smile – .

How many strokes did you have when you were typing this, or were you just born retarded?

Maybe some day you will loose your virginity and find a woman crazy and dirty enough to have a baby with you. And I hope it will be a baby girl… and by 15 she will be gang banging on the streets in exchange of drugs. But hey, she will be an adult and nothing you can do about it!

this is the only good comment you have ever made

just because some teenage girls seem like they are more mature and appear ready to be sexual in a adult way dosent mean adults should be having sex with them. A lot of young girls and boys think they know what they are doing when they are young and grow up to regret it. its up to adults to try and steer them in the right direction not take advantage of them. there seems to be a lot of pedo apologists on this site who think its close minded to say what im saying but that is just a cope. if you truly believe you love someone that is not of age you would wait until they are. if you cant you are sick. you are scared that in the time that they are growing up they will have realized youre a fuckin loser cuz you are. youre not “open minded” you are a small minded ape and you will never be happy and dont deserve to be. i feel sorry for people who are actually sick in the head but pedophilia is becoming way to normalized in our society and people dont even realize it. if you are attracted to kids and have no self control you need to do yourself and the world a favor and put a gun in your mouth and pull the trigger. no one should allow themselves or be allowed to go around ruining peoples lives and thats exactly what happens when you act inappropriately with a minor weather they think they are ready or not is irrelevant.

I’m assuming you haven’t actually seen the movie as your comment was taken entirely out of context. I wouldn’t say this is a film about pedophilia and if you actually had taken the time to watch it you’d understand what I mean. Also, if you are so moral, this probably isn’t the website for you…

I would elaborate further, but I believe both Pieter and OJ made very good points and I don’t think I could add much to what they have said. I’d also like to say that I am not a defender of pedophiles or a pedophile myself, rather a defender of sexually frustrated, sexually repressed teenage girls (I was one, once, and I’m sure I’m not the only person who has felt that way). It’s unfair to assume that girls in these situations are always victims, or that young girls are too stupid or ignorant to know what they want. Watch some Catherine Breillat films (36 Fillette, Une vraie jeune fille for instance) and you might understand what I’m trying to say.

Also, there is never reason to tell someone to kill themself, It’s quite a pathetic retaliation actually. I can’t stand these sort of petty attacks. These days it seems that instead of criticising somebody constructively (if that makes sense) people just call each other names like they’re still in the school playground. I see it a lot on this website. ‘Fucking loser!’ ‘Cunt-faced whore!’ ‘Sick fucking bastard!’

Based on the way your comment was phrased I am assuming you are young yourself and perhaps not in the best place to comment on this subject. And I don’t mean to sound condescending, I understand where you’re coming from and I’m not saying you’re wrong, just that I don’t agree based on my own experiences. But who knows, my views on sex and sexuality have always been a bit warped.

and you are extremely boring, start to think about anything that sorrounds you. You are on a website called effedupmovies and call people out for being weird, how uninspired do you need to be

wow, i loved this film. This will take up some space in my brain for quite a while, the last scenes makes you second guess Remi’s intentions and what he really wanted

I’d actually read this in a psychology book. Teens usually feel attraction to their parents those years. Yes, it’s wrong what Remi did and he can go to jail for it but it’s also a sad thought that we, humans can’t always have what we wanted.

julien bichet if u see this i fucking love you