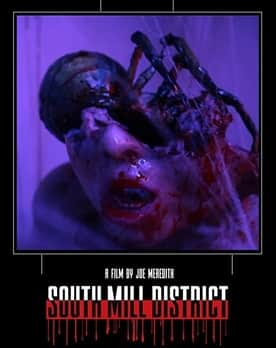 Plot – Spoilers:
A short movie with stop-motion scenes in between.

Experiments on an alien lifeform resulted in an arachno-alien hybrid that was unleashed on residents of South Mill District. The effects on a couple of residents are explored.

THANK U ADMINS:) I’ve been wanting to see this film for quite a while! I don’t like recommending movies I haven’t personally seen tho for ur excellent site, so I’m glad someone else did.

Those r some of the thoughts I had after viewing this short film. Unique in that it combined a highly distinctive plot regarding the hybrid alien spider weapons, with a hallucinatory feel in regards to the filming and ‘feel’, set against a quarantined industrial backdrop known as South Mill District.

Brave in the use of the stop-motion special effects, which could very quickly make-or-break a film such as this. I’d say they added to the dreamlike quality, and tho at first somewhat distracting due to the camera not remaining perfectly still during such scenes, after a few it furthered the aforementioned dreamy feel of it, almost like u were in someone else’s thoughts, brain, or dreams. Brave of him to choose that sfx style, and while obv low-budget, was a completely fresh take on a stale af effects style for most various films in the horror genre. Practical effects (even stop-motion ones) almost always win out over CGI for me, usually. If u liked this style, another horror film that had effects like this I had found interesting and recommend is titled Mécanix.

Left me wanting more, because that’s the major fucking problem with the good short films. So many feature-length films don’t deserve their runtimes (esp the current trend of ~3 hour blockbuster action movies, nope!), yet so few short films leave me wanting more. Honestly, I don’t like many short films (sub 60min) at all, so very few actually leave me actually wanting more. A great short film that also had this effect on me was AM1200. There r 2 sequels to South Mill District (Teratomorph, and upcoming Variant) apparently, and I’m thinking I will give this director his due and pick em up.

Fresh af uniqueness, glad I finally got to see it, so thanks again admins! I give it a 7.5/10 for what it was, which for a short film, is high for me. Loved it!

I want that RED SKULL’’’’’ Hang it in my living Room for ‘Conversation piece…… Great film, should’ve been longer…………Kool Flick………….thanks

Yeah, agree with both above comments. Should have been a feature film, it would have explained more about the plot. Great talent here on show by this director. Hopefully he will make a longer movie in the future. Cheers everyone.

this one is good. its sequel teratormorph is way better.

Hi,
1st time I comment, great short and I’d like take this space to thank all “effeupmovies.com” crew members for their work so “precious”, ’cause as I’m used to say “we can’t always watch Barry Lyndon!”
Enlarge your world.
Thanks for all, greetings from Italy.

It is very clear that a lot of heart and soul went into the making of this short. I have a lot of respect and admiration for Joe. I look forward to seeing future releases. he is a writer / director with a lot of potential.

Just a quick “thanks for existing” from a dogsbody in England. Couple of films I wanted to watch on here, couple I was tempted to watch by the comments and descriptions. Seriously, thank you. It’s hard to find a decent ‘shake you to your bones’ flick anywhere, and the ones I like, I buy. You are very much appreciated by this internet nobody.

I love that this site exist and there’s a place for movies like this!

But I think this short was to long and boring as hell!

boring as hell is right,,, might make a good music vid with the right soundtrack, maybe some nine inch nails

I think this is a really cool concept and an example of people using what they’ve got paired with their skills. It’d be really neat to see this expanded upon. The SFX/gore is incredible for what it is and the film itself has a cool vibe and atmosphere.

joe meredith reminds me of a young john carpenter who used to do basically everything from editing to the lights…ah! if meredith had some more money or a decent producer he could do real wonders

cover was better than the actual short lol

Great movie especially the puking part was amazing. I wish my puke was so beautiful.