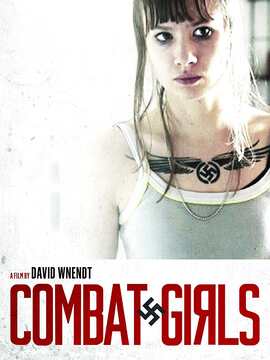 Plot – Spoilers:
A German girl, Marisa, works at her family’s grocery store. She’s hostile to everybody except her mother who is distant and merely tolerant of her. Marisa’s rage finds a home in a local Neo-Nazi group whose leader she’s dating and they often entertain themselves by attacking anyone who looks foreign to their lives.

Marisa encounters two Afghan refugees a couple of times, one of whom pisses her off even more for his quiet defiance. It all snowballs into a moment of blind fury and she begins to experience contradictory emotions. Meanwhile, there’s the parallel track of a relatively more stable teenager Svenja, who starts hanging out with the Nazis and is drawn to Marisa’s overpowering charm.

Combat Girls is mostly focused on the Neo-Nazi aspect of Marisa’s life, and while the relationship with her mother is detailed in flickers, it’s possibly the one thing that glows the brightest here. The source of Marisa’s kinship with a Nazi worldview, her grandfather, might also have been indirectly responsible for all her rage – the simmering iciness of her mother probably had roots in his brutal treatment of her for getting pregnant young and then later doting on the kid once it was finally born.

Combat Girls stumbles a bit into the trope of the pitfalls of holding extreme views, but is mostly fair in its sympathy for all its characters.

She really kinda looks like Jessica Biel to me.

I noticed recently that a very good site for rare films has had its releases copied and then watermakerd by another site. The theft is fine but why the ownership tagging. This place watermarks so I hope they give credit where credit is known.

I really dig the message in this film… refugees fuck you up whether you are nice to them or not.

finally a movie I can identify with

TED NUGENT… Always Was, Is and Always Shall Be a FAGGOT

In Risky Business. Tom ..the jaffa.. Cruise claims to have made 8 grand in one night.
If one night was 12 hours and each trick was 5 minutes that would be 144 tricks at 55 dollars. 55 dollars is worth about 160 dollars in 2022. Is a five minute shin^dig with a lady who has been working all night really worth 160 dollars?

Nigs are fecal and what you do with fecal is flush it down the toilet. Flush all the Nigs

Its a tough choice on what best to watch in memory of Robbie Coltrane and I only watched ..eat the rich.. recently. So although ..scrubbers.. is tempting I am going for ..the supregrass.. and maybe a few episodes of ..cracker.. .

A message to dear admin:

This site I awesome, the amount of fascinating movies been uploaded is a great work. I really appreciate what you and your team are doing but you got to disable comments section. It is going to ruin this site.

So is the movie any good?

ehh it’s alright. This Is England does what this movie is trying to do way better in every way

Ok there where 99 rapes of German women at a Berlín street party new years eve 2020. I kinda understand why German women would start to hate their Afghan “cultural enrichment”.

No one is here for the movie anymore, it’s all about the comments. The new Reddit.

I found it difficult to watch beyond 1:31, I actually had to pause it briefly because I was certain Marisa and Rasul would be inexorably retributed. Kriegerin explores the growth and maturation of Marisa’s defiance as a woman existing in a staunch misogynist culture.

On one hand this film builds up a boogeyman and comical villain that is simply not true. I’m no neonazi but this is not how neonazis act. Nay this is not how human beings act. The film implies the dynamics of the group are akin to a cult or mafia (plausible), where you can join but you can never book out, otherwise why doesa “Toilet Tanya” even hang out with them? It made no sense to me that anyone would just endure bullying like that. Marisa refuses to serve Afganis but later gives in because the younger fella gives her puppy eyes? Because she has a change of heart? Because gramp told her to fix her fuckup? Marisa acts mean to the new girl but later grows soft because plot? Svenja just lets her stepdad Hank Hill feed her cigarettes and just takes it, rather skillfully, because… she just does ok. Svenja boyfriend’s motivation isn’t even stated in the whole film, except maybe he was antifa to begin with. It’s ambiguous. A lot of the film requires benefit of the doubt and I have no doubt in my mind you could’ve written a better film if you didn’t see nazi ghosts.

On the other hand it shows everyone with their faults and three dimentions and none of the characters is fundamentally dislikeable. I’m not sure if you can say it’s a film with a message, (beyond nazis are the exact human waste they criticise – juxtaposition between a particularly jewish looking member and the ugly jew in the 3rd Reich documentary), i feel like the director just wanted the afgan boy to make it. Let’s hope the stepfather considers his 3000€ well spent.
It’s best enjoyed if you’re german. One praise I’ll give the film is that it’s very nostalgic and familiar to me, since I grew up there. Nazi Tailor Swift and German Tiffany Trump are cute.

Mid. Not a bad watch but I won’t be recommending it to anybody