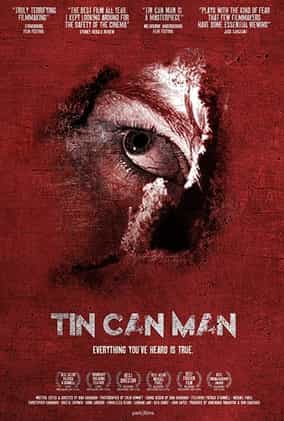 Plot – Spoilers:
At one point in his life, Pete fancied himself an actor on the stage. Right now though, the regret of unfulfilled ambitions is the least of his concerns. His girlfriend just dumped him when he asked her to marry him. He’s bad at his sales job and has been given a 20 day ultimatum to straighten things. And his lonely Dad feels he doesn’t give him enough of his time and presence. As Pete sits alone in his darkened room, he looks less a victim and more a potential perpetrator. But there’s a knock on the door that will change this.

The first few minutes of the interaction between Pete and the visitor, who is exasperatingly polite, is pure terror. This is possibly the most eerie, politeness has been depicted in cinema.

Shot in black & white with a torch lighting up the claustrophobia, Tin Can Man appears to throw a few odes to at least a couple of movies – Man Bites Dog and 100 Years of Adolf Hitler.

Hey man thanks so much for uploading my request!!! I love this site and I’m so glad I came across it! Once again much thanks for finding and uploading this for me!

Wow. This is a really fucked up movie.

Well that was distrubing! Thanks for uploading this one.

I fucking loved this. I can’t believe it’s not more popular – I mean it! You’d think you’d find a gem like this on Reddit or something, but I’ve never come across it (like so many other great movies on this AWESOME site!) Highly recommended. [SPOILERS] The part the spooked me the most? Surprisingly it was the pale face in the field. Who was that anyways? Or the Deaf Man for that matter? Eh, who cares. It had the desired effect, which was to unnerve and unsettle.

Woah, that was fucking great. Thank you.

fucking pish. put me to sleep. how fucked up

Easily one of the best movies i have found here. I can just agree, this needs to be more famous. Totally intense, atmospheric, nightmarish with that hint of funny madness. Great acting, especially by Michael Parle. Music was also fantastic, had some noisish and dark ambient vibes. Watch this!

I think this film might have haunted my sleep more so than any other film I have seen.

“This is possibly the most eerie, politeness has been depicted in cinemas” -> this comment tells u all u need to know about the uploader, a comment meant to inform others he/she is full of shit.

haha, kind of agree with your assessment of me.

what an incredibly odd film. very enjoyable though

i’m surprised this was actually SO GOOD, did not excpect that

What the hell did I just watch 😀 I’ve never heard of this or the director before. What a hidden gem!

This film starts of well and is intriguing. Being filmed in B&W adds to the eerie / creepy moments. However, (imo) the start isn’t sustained throughout the film and it looses itself in the last 10+ minutes. It felt like the director didn’t know how to end the film, and I found the ending poor. Hence the score: 3/5 tin cans

I took a long break from consuming any kind of visual media for several years. This movie came out before I did that. I had never heard of it before. One of the most original pieces of art I have ever seen. File under favorite.

Very grateful for this website, guys. Thanks for being here. Breaking the commenting rules to request Kung Pow! Enter the Fist. I’ll request no more, but I know how to evade bans so gut me with an itty bitty knife if you want to stop me from commenting.

Oh, I know! Honestly, the suggestion was a joke. Y’all are on top of it and don’t need any suggestions. Again, thank you for being here!

It’s ok. . .I’m not a huge Lynch / Cberg type fan.. it’s a bit too slow for my tastes .. but the character played by Parle is excellent.. it reminds me of a lot of films I’ve seen here over the years which knocks off a star and it’s premise is not totally original.
The oppressive dark filmic presence should make it scary arty and dark . But in this case it’s too much after say 20 minutes… Sadly it doesn’t go as far as it should.
Now if this was made in Spain…France or Korea it would be stunning. ..
Worth a watch for homegrown talent if you UK based like me.

you’re gonna be the new tin can man