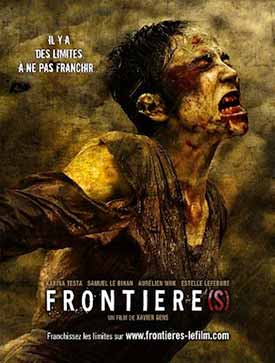 Plot – Spoilers:
The streets of France are riddled with riots following elections and a young gang use the opportunity to make away with 125K in cash. One of them is shot, and so the group split with the plan of eventually meeting at the border.

Two of them drive down there and decide to pitch tent at a hostel where they even get laid and shrug off the stress of the preceding hours. Things begin to go pear shaped when the people running the place notice their cash bag. But the gang of street thugs aren’t about to be let off easy with a simple theft as they soon discover the bizarre truth about the loonies living there.

Favorite Scenes:
1. Tom and Farid snaking their way through the narrow tunnel is claustrophobic and so well captured, you almost feel the weakening breath as Tom whimpers that he is stuck.

2. The climax as Yasmine in her nice white dress gets progressively sprayed with gore as she moves from one victim to another.