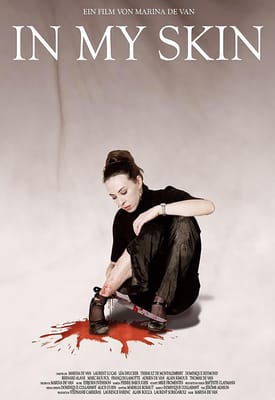 Plot – Spoilers:
Esther is in a high pressure job that doesn’t forgive too many screwups. Her boyfriend Vincent is keen on taking their relationship further and the two are considering moving in together. Sandrine is Esther’s friend from college and recommended her for the job – the two are quite close and Sandrine often looks out for her.

So all good at this point, until one loud office party when Esther steps out for some quiet and trips on some backyard junk. She only notices a while later, that she has been cut badly. The fact that she didn’t notice the wound strikes her doctor and friends as odd, and soon this bizarre oddity sets her down a comforting path of self-mutilation. Meanwhile, her relationships with all around bear the brunt of her new obsession and she soon starts concocting wild fancies to hide her gory escapes.

In My Skin could easily have turned into a parody or another gore-fest if it weren’t for the brilliant intensity and manic eyes of Director/Actor Marina de Van. There are several moments that will stay with you long after you’re done – personal favorite is the self-cannibalized tasty little treats Esther indulges in, after a particularly unsatisfying corporate dinner. 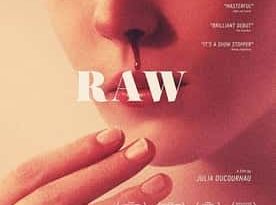 A beautiful film. I would recommend this to anyone who wants to get into foreign horror.

amazing film, it dosn’t need much gore to make you feel uncomfortable. her flesh is her secret lover, i think is brilliant

this movie doesn’t have a climax, but i didn’t really expect one, it’s an alright movie

Dont know why, but this film made me feel nauseous. Self harm does not normally bother me, but when they start to eat bits of themselves, its in a class of its own. The only self harm movie to make me cringe was ”Cutting Moments” by Douglas Buck. Anyone interested, you can see it on YT, but it has a few cuts. In other words, the censors make a few cuts on the cuts in the film, lmfao.

True, but the gore is spot on, especially in the breast cutting scene. That is the scene that was totally cut out of the YT version.

Was it cut from the trilogy of America dvd? I had the dvd..

Depends on the dvd distributors, but I would think that if you live in the US it would have to be the unrated version. The censors always were unhappy with this film as it also contains references to incest and pedophilia. Regards.

Wow. We both absolutely loved this movie. Our eyes were glued to the screen. It’s hard to explain just how beautiful this movie is so watch it yourselves.

What we can say though is that the auto-cannibalism was so orgasmic and gorgeous.

Out of all the movies I’ve seen, this was one of them.

A good movie – its the psychological downfall of a women who suffers from pressure caused by her failing job, failing relationship and failing friendship. Finally she starts to self harm in order to cope but this only makes everything worse. She starts to cut pieces out of her own flesh and preserving them in order to have something that remains stable in her life. I liked it and it has some great shots too.

such a good movie, love it

although i fell asleep from boredom it wasnt THAT bad