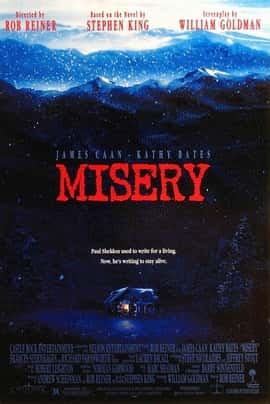 Plot – Spoilers:
Paul Sheldon is a writer who feels he’s been a sellout all his literary life, but now’s the time to mend his ways. So he’s been cooped up in his favorite writing lodge and has finished his latest work that he believes will showcase his true artistic gifts.

Driving back home, Paul crashes and is sure to die in the snow when Anne Wilkes pulls him out of the turtled car, hoists him onto her back and carries him to her place, where she tends to him over the next few weeks. Annie is a former nurse, but more importantly, Paul’s self-proclaimed No. 1 Fan. She’s also been stalking him and sees his helpless bedridden self now as an opportunity to wheedle her way into his writing world.

Annie is terribly disappointed with Paul’s last book where her favorite character was killed off and insists that he fix this in his next novel, to be written under her stern watch. Or he’ll be left to die there, with the world unaware of his whereabouts.

As a writer, Paul already has a certain control over prose, but this is one situation where he really has to learn to choose his words carefully when dealing with Annie who is a master at casually insinuating the potential violence that looms for him.

In a movie where it’s mostly about two people interacting, the two leads, Kathy Bates and James Caan, make sure this is one of the better film adaptations of a Stephen King novel.

Interesting movie actually, especially like how the facial expression of the nurse was portrayed by the actress.

The hobbling scene is fantastic. You expect to not see it and then, boom!

you could say Paul doesnt have a leg to stand on

finally something in english to watch, about fucking time

Guess you could say Annie was put out of her Misery.

Nice movie with an interesting and unusual plot, the main actress was A class

It’s a classic.. and pretty ahead of its time…. Unlike say Cape Fear which thought it was brooding and menacing.. it was totally lame compared to Bates and Caans performance in this. Much better than the novel too which is unique.

Watching this for probably the tenth time cause he died this weekend, and he has been a part of movies my whole life