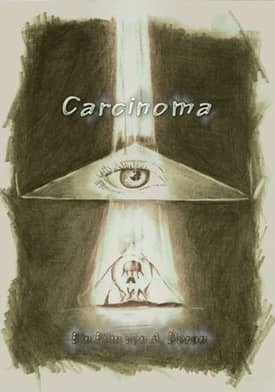 Plot – Spoilers:
Dorian who works at a landfill has a sexually satisfying relationship with his wife, who shares some of his alt kinks.

He notices lumps on his stomach coupled with uncontrollable bouts spewing shit and so checks himself into a hospital. But some of the sights he sees there of the sick and dying sends him back home to avoid treatment. Instead, he develops a fascination for his illness (that appears to be colorectal cancer) and begins poking away at wounds that appear.

Carcinoma will lift you soaring high in its ecstasy of pain and suffering while briefly bringing you down. But it’s mostly unrelenting. You might even hate Marian Dora for stripping grief of any frills and shoving it in your face.

Just when you think the guy’s suffering has peaked, it shifts focus to his depressing mother who takes care of him with a noble sense of duty, love and senility. There are also terribly ironic scenes like when she brushes his teeth for him, when the guy is literally rotting and oozing shit and piss. And more tragicomic scenes involving used-tissues and bandages.

Whew that was good

Let just say… once he moves back in with mum ,the shit really hits the fan!

Fair Dinkum, mate, thats a good way of describing it, couldnt have said it better myself. On ya cobber, get a dog up ya!

Gerard
Reply to  Man in oz

I almost puked a couple of times during this one. Well made film but it was tough to get through. 4 out of 5.

Yes indeed.. pretty crazy fact.. he is just a big pile of brown.. like pizza the hut.. cept brown.

Wow… But is he still alive? Or not? Tell me…

is it bad that i find this pretty tame?

I came to feel nauseated, not sad.

Slow, boring at times, beautifully shot seanes as one expects from Doria. No where near as haunting or repolsive as some of his other work. I would only recommend watching it arfter seeing his other work which is probably why most of us watched it DEFINITELY NOT A FIRST DATE MOVIE.

If she isn’t kool with this on the first date.. she is too regular.. too common.. too basic.

Surprisingly repellant. Truly the most revolting movie I’ve ever seen, and that’s saying something. I want a fucking certificate or a trophy for enduring this while eating ice cream. You’re doing god’s work EUM, you brilliant fucks!

The most horrifying shit I’ve seen in my entire life. I genuinely wanna kill myself right now. Time to watch the rest of this guy’s movies.

A truly disgusting movie, but also a sad one. Some parts of the movie made me laugh cos the background music was like mocking the man’s suffering. I enjoyed this movie so much.

Pretty nasty, but I thought it was going to be worse. At the end tho I got kind of nauseous watching it, I was just hoping for it to finish soon. The third effed up film I watch, don’t regret, I guess I have a stomach for this kind of shit.

Julia, if you think you have the stomach for this type of movie, check out ”Thanatomorphose ” ( also on this site ). I just watched it and I think it easily outdoes ” Carcinoma ”. I would suggest watching it on an empty stomach. Cheers.

Thanatomorphose can’t hang with this.. doesn’t have the real actual body fluids.. as Dora’s stuff always does.

Ok, wasn’t as bad as I had imagined. I think I’m just desensitized. That being said, this movie is terribly disgusting. I was scared to even watch it in the dark because of how gross I knew it was about to be. I was surprised at how realistic the effects were considering the film probably didn’t have that big of a budget. If you are currently debating watching this like I did, just do it. It is very nasty, but the story makes up for it (maybe).

I have always been a fan of this man’s work. Melancholie Der Engel is my favorite movie of all time. So you could say I am rather trained to endure the viciousness and depravity that his movies offer. But this one, I actually had to pause, walk away from, and take a breather before moving forward. It really is that messed up! Beware to all who venture through this horrifying and repugnant masterpiece!

Another amazing piece of work from Germany and it’s favourite son…. Possibly… Everything a fan of admirer would expect from Dora and more.. it’s mature.. it’s beautifully shot.. the piano vignette just right. After the sprawling and harrowing angels film this was a blessed release of sorts. . . . Fantastic and obscene in equal glorious measure. God bless you MD.

I’ve watched this absolute stunner six or so times now.

I watched this not long ago and yes it was very disturbing and pretty nasty. It takes you on a journey that for me even though I twice told myself I wouldn’t finish it and find something else I still kept watching and it was a good film just not sure how I feel except bad for the man suffering

I watched it all but still not sure how I feel about it. It was filmed great making everything dark and dreary like what he was going through, the acting was great and the gruesome scenes were done really well. Definitely an effedup movie though. Have to check out Marian Dora’s other films

Ha! What a strange yet oddly captivating film. Being open to interpretation, I suspect Dora had a friend/family member die of colorectal cancer and was impacted by the gradual decline in the individuals health, physically, mentally and spiritually. And he worked to express this rather traumatic experience on film. And he did a fine job. The gore and splatter of the movie was upstaged by the gruesomeness of what is a truly a hideous and disease.

Damn… At the 1 hour mark, this movie becomes an endurance test. I almost tapped out when he picked up the razor! The abundance of bodily fluids in this movie will make your stomach churn. The ending — albeit excruciating to watch, offers a huge pay-off. I do not regret watching it and kudos to everyone who finished it.

This is one of those movies that only the strong ones can boast for watching! Lol
Thanks for the upload @EUM

It’s great to see a lot more comments now, hardly any when I first discovered this AWESOME site. These boys really are the real deal, they have/get real hard shit to find, all at our fingertips!

Many thanks EUM……I salute you sirs…! :o)

There’s a reason he’s anonymous, I doubt he’d be alive if people knew who he was …sick fuck

The name is Romanian.

Seen all of Dora’s movies except this one. Thanks for the upload, looking forward to being disgusted by the legend of disgusting stuff

After watching this I don’t think I’ll ever be able to eat tumors again. Thank you for uploading this.

MR BRIMSTONE
Reply to  Nobody

Seventh Devil
Reply to  Nobody

this made me LULZ so hard

Wilde
Reply to  Nobody

What about sauteed in butter and served with a side salad? ?

oh my god this director is crazy….. great stuff! thx.

GROSS! Try not to eat first before watching this film. You might puke as well. But thanks for uploading this movie ‘effedupmovie’ guys. I still love your website!