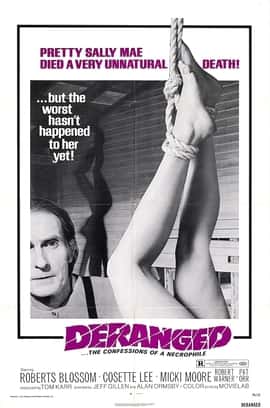 Plot – Spoilers:
A farmer Ezra, who’s excessively devoted to his bed-ridden mother tries his best to keep her alive long beyond her will. Mother has inspired in him a hatred and suspicion for women as disease-carrying, thieving sluts. This suits Ezra fine as he looks well older than he is and has developed peculiar mannerisms and expressions that are probably charming only to his mother who anyway sees everything blurred.

Finally one day the old lady dies and Ez spends a year missing her before he decides it’s time to bring her back home from the grave. By this time it’s clear he’s lost his mind. And his sense of smell. From here, he just gets progressively worse.

Very loosely based on the exploits of serial killer Ed Gein, the version here is the European one that includes a brain scooping moment.

Saw the trimmed version of this on VHS some years ago, this version has 10 mins or so restored. For a 70s film its right up there with ” Buio Omega” and the ”Nekromantik” series. Necrophilia movies are not Australian censors cup of tea, they ban most of them. So, thx EUM for posting this obscure gem, its got a good home here. Dont know where you find these rare films, but keep doing it, we all appreciate the work you do. Cheers!

Y’know most the time i don’t like watching old movies like this, because 95% of the time they’re terrible. Though, I enjoyed this one well enough.

crazy….necrophil…..mad….weird and cool stuff!
i like old weird movies!
thank you admin :)))

confessions of a necrophile ? them thar are marrying words,
gonna use this for first date material, hmmm

Despite the fake-looking props and blood, this movie is morbidly funny and a great watch. Ez is so believable, the actor really embodies the character he represents…I wouldn’t imagine someone that adorable and naive like him to be capable of committing such unimaginable horrors but everyone is capable of something, it just needs one push to trigger it ?

Such a well acted and great film. Love the little bits of dark humour splattered in.

That was absolutely insane ! lol The addition with the huge spectacled Alan Wicker-esque reported narrating the story is great ,I love 60’s&70′ s dark comedies/ horror and I’ m not sure how I.missed this one .As ever a bit thank you for your dedication to uploading the obscure .

Pat Orr, the last victim left hanging in the barn had big, beautiful bewbz and a real nice ass! It’s a shame she only did this one lousy, slow, terribly filmed movie and one previously unaccredited role as a background extra, she should’ve been used in more films in the nude. Everyone else in this stink bomb was an awful actor or just flat out ugly AF! The “blood” used in this $5 budget POS looks like gloppy ass red paint! Too thick and red to be blood! Could have at least just went to ANY butcher shop and got a pail of animal blood! Cheap ass 70’s garbage! LOL

This one was fun 🙂