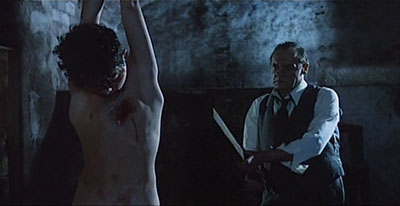 Plot – Spoilers:
Inspired by the nasty life of notorious child-killer Gilles de Rais, who served with Joan of Arc, In A Glass Cage or Tras el Cristal (original title) is not some historical biography of Gilles de Rais. Instead, director Agusti Villaronga who also wrote the movie probably used him as a muse while constructing the character of Klaus, a Nazi doctor with a twisted interest in kids. Following the end of World War 2, Klaus lives in exile in Catalonia with his daughter and wife. His sadistic violence and sick interest in young boys hasn’t diminished however as he continues to rape and torture young boys. In fact the movie opens with one such ‘experiment’ on a boy.

The primary theme of the movie is of revenge when one of Klaus’ victims, Angelo, who survived, enters their home in the guise of a male-nurse to help Klaus. Klaus after a possible suicide attempt is now paralyzed and requires an iron lung to help him breathe.

Marisa Paredes is very good in her role as Klaus’ frustrated wife while Gisele Echevarria is equally impressive as the bored lonely daughter who is drawn to Angelo mostly because she’s probably sick and tired of living among old people who are always snapping at her. It is unclear whether the wife is aware of Klaus’ terrible past. This is one of those brilliant movies that explores the psychology of each character as they fall further and further down into the cesspits of depravity.

You know its a jew that made the trashy jewvie (jew movie), only jews are evil torturers and murderers, as even the entire world is awakening to it now. HITLER WAS RIGHT!!!!!!!

couldnt more agree with you

Kindly kill yourself. The world is better without Nazi scum.

I’m in a glass cage of emotion!

I love the aesthetic of this movie, please watch it

Alright, im no way near to say Hitler was right. Noone has to right to decide what race is allowed to life but even i have to say that Jews have messed up in 109 countrys for a reason.

I wonder if Stephen King was influenced by this movie.