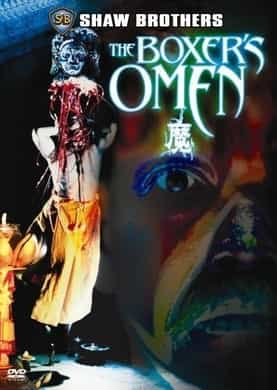 Plot – Spoilers:
Hung is a boxer involved with the Hong Kong crime syndicate. He watches his brother unfairly beaten by a Thai boxer and swears revenge. Meanwhile, he is disturbed by visions of a monk whom he tracks down to a monastery in Thailand. There it is revealed to him that the monk was on the verge of attaining immortality when he was thwarted by a bunch of satanists. The monk also alleges that Hung and he are twins from another life and that their current lives are also intertwined. In short, it’s up to Hung to fight the dark arts, which he does by becoming a monk in 3 months! But the dark artists aren’t about to give up easily and Hung switches between being a monk and a boxer to avenge his brother.

Made in 1983, some of the effects are downright comical but in a good way. There is also a truckload of WTFery that makes this a delightful watch.

A “truckload of of WTFery” is, not only correct, but the best damn description I’ve read in a dog’s age.

Fun watch. Thank you for uploading it. We all appreciate you guys keeping this site up and running, more than you know. Otherwise, many of these WTFery-filled cinema moments would be unseen. Thank you!

Weird as Fuck! Thanks for the upload, my friend 🙂

Awesome film, thank you very much for this!

Thanks for uploading! However- I noticed there are a few scenes missing from this cut !! Not sure what version this is. Check out the trailer and you’ll see .

I see a lot of Steven Speilberg in this, Temple of Doom and a few others. Surprisingly (or perhaps not so surprisingly) this came out earlier than both.

The name of the actress who plays the naked witch ?

It was totally not what I expected. What a great experience.

Cool movie, the gore films from Hong Kong are fun to watch, also surprised to see Bolo Yeung (the bad guy from Bloodsport) doing his performance on this one.