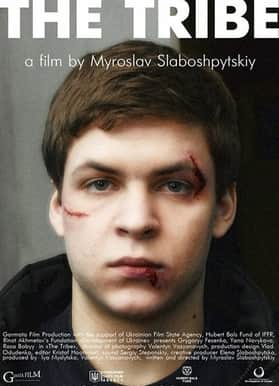 Plot – Spoilers:
A new student arrives at a boarding school for the deaf and is quickly initiated into the tribal gang that runs things there. Their activities include using the smaller boys to sell soft toys on trains, but primarily they pimp a couple of the senior girls out or mug older folk. All aided by their woodwork teacher.

The newbie does everything to fit in by not resisting and even proving himself in a hazing fight. But he often gets left out (no beer for you – mugging scene) and sometimes is even treated like a contemptible noob (first time out pimping the girls).

In the end, it’s a tribe that claims to think about the collective rather than the individual. A tribe that quickly moves on from the shocking death of one of its members. And finally, a tribe that in practice, actually follows the diktats of its leader who’s basically looking out for himself.

While the movie is silent in its use of voice or music and is slow-paced, it’s shrill and quick during its moments of brutality, one of which you might feel in your genital areas. It’s also a credit to the director, narration and the actors that even though you might not have a clue about Ukrainian sign language, you’ll get most of it, probably even better than you would a foreign-language movie without subs. The lack of subtitles also helps brutally move the world of the deaf further away from those that can hear.

Personally speaking, The Tribe was a gentle reminder that however tribal we might still be, living in a tribe doesn’t seem like something to yearn for.

I watched this movie few years ago, brutal but honest. By the way sign language they use is different from American or Australian.

No shit… There are more than 300 different sign languages in use around the world. They vary from nation to nation. Even in countries where the same language is spoken, sign language can have many different regional accents that bring subtle variations to people’s use and understanding of signs…

Let me start by saying nice touch EUM by posting an Ukrainian movie… but you could have chosen a better one. Very slow, poorly executed (the fighting / beating scenes are laughable) and not engaging at all. I’m disappointed, biatch!!!

My request: “Audrey and the 1.000 penises”. The main character is retard thought…

I agree with Butch. This movie sucked. Really slow, long and boring, fight scenes were weak, the story was weak and the acting was poor. There is about 45 seconds at the end that are good but not good enough to save the movie. Hey girls – when you have an abortion isn’t there blood involved? That scene was weak too. 1 out of 5 stars for the only good scene in the movie – when he smashes the cabinets on the four guy’s heads at the end. Whoops – I ruined the whole movie. Sorry.

you,re not sorry…….you knew exactly what you was doing ye fucking bellend!

Respect for anyone who can correctly say directors surname. Its like a tongue twister.

Do you even watch these movies ??

How the fuck do you guys know sign language