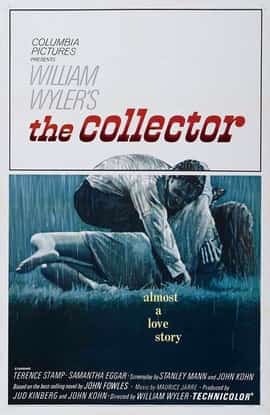 Plot – Spoilers:
A lonely British gentleman, Freddie, who has no pressures of earning a living, spends any available sunny day by himself, wandering the grassy knolls that surround his old farmhouse. These are perfect spots to search for rare butterflies, of which Freddie boasts an enviable collection. Pretty butterflies aren’t the only things that catch his fancy though. There’s Miranda, an art-school student whom he has been stalking for a while now. She was from his town, but when she moved to the city, he did the right thing and followed her there.

But Freddie is a gentleman. So even though he chloroforms Miranda and locks her up in his cellar, he refers to her as his guest who he hopes will fall in love with him eventually, and refuses to sexually force himself because he respects her too much. A true gentleman.

The Collector is one of those truly great effedup films. Serial killer Berdella was so in awe of it, he even claimed it inspired his deeds. This is as much about the class struggle as it is about a psychopath’s desire to possess that which he believes is otherwise unattainable.

Favorite Scene:
Because you see… they’re looking for you alright. But… nobody’s looking for me
And the epic music that follows, like something heroic has just happened in a Western.

This is soooo goooooood <3

EUM, thank you SO MUCH for posting this. I requested it ages ago and thought it had been overlooked or forgotten about (with all the other movies you are trying to get on here). This is a real classic and Terence Stamp does a brilliant job. Those creepy eyes…!

Great movie, i highly recommend it.

THANK YOU SO SO SO MUCH FOR THIS! The book is one of my absolute favorites and I’ve never been able to find a full clear version of this movie until now, Thank you once again I’m so excited to watch this!

thanks for the upload

entertaining and well done, not so much effed up, but I’m glad I gave it a chance. If you like old movies with great acting and filming, definitely worth a watch. thanks again EU

Just got the novel and I’m enjoying it so far. I didn’t know there was a movie but I’m very excited to watch it!

This….and The Swimmer 1968…I need to discover more classic films like these…Thank you for posting such interesting and unusual movies ????

I fell in love with Freddie’s voice…