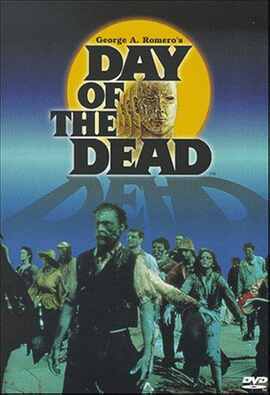 Plot – Spoilers:
The next in the Night of the Living Dead series sees a small military unit tasked with assisting a group of scientists that are researching and experimenting on zombies in an underground facility. The lead scientist believes the zombies who now outnumber humans 400,000:1 can be controlled by domesticating them. But the captain of the unit thinks he’s full of shit and can’t wait to get the hell out of there. There’s also a female scientist who feels compelled to protect and help one of the biggest losers ever to have a protective girlfriend. And so, like in the previous films, tensions simmer within the group.

Day of the Dead has outstanding effects during the gore scenes and that’s about it.

this was dead boring

This film doesn’t get as much love as the first two movies in the dead series which is a shame as it’s on the same level as those movies. It’s great that Romero decided to take the series in a different direction rather than rehash the same film each sequel. The gore effects are outstanding and i love the claustrophobic setting. Like the first two entries the movie does a good job of demonstrating that while the brainless hordes of zombies provide an ever present threat the real monsters are the ones that are still living. Rhodes makes for a great villain of the piece.