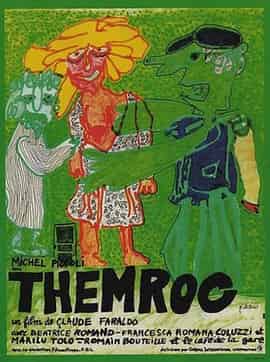 Plot – Spoilers:
Themroc is a balding Frenchman who suffers the drudgery of being alive as a small cog in the working-class wheel. There are a few bright moments in his life though, like when he catches glimpses of his half-naked sister/daughter. These are however often quickly dullened by the appearance of his frazzled mother who never fails to remind him that he’ll be late for work if she didn’t prod him along.

Then one day, Themroc shores up his room with blocks of stone, building himself a cave, and decides he’s gonna live like a stone-age man.

The language in Themroc is interesting. There are no distinct words or language spoken through the film and muffled words appropriately litter the din of the have-not rabble Themroc is a part of. So in a way, well before he turns into a caveman, Themroc is already one, who just happens to be living in relatively modern times. When the haves talk, the words are refined, almost enough to resemble a language. But this changes to gruff sounds when they interact with the have-nots and French as a language appears only on signboards.

EUM guys, going back to the old style of commenting is like going from fillet steak back to sausages. Will the updated comments come back and when do you think it will be, if ever. The good and bad emojis were a great success, I think and it also gave ppl the chance to comment without actual words. All the best in getting your problems sorted out, I am sure all of us commenters are behind you. Cheers.

I dunno Zed. It was becoming a tiresome bore and very juvenile in places.. now I’m gonna watch this French film. Let you now my thoughts in a bit. . . Cheers friends and EUM posse

Tried to watch but couldn’t finish. Made it about 30 minutes or so in and just couldn’t take all the gutteral noises. Maybe try again in the winter when there is nothing else as an option.

Well… It wasn’t bad at all. . Not entirely sure what it was a satire of except for the banality of the rat race.. the daily grind of a commute… Work … Existing to be a.slave and it was a definite gesture to I guess French neubauten and the rise of cheap modern housing possibly for a cheapened modern workforce… Hmmm makes one think.

Thanks Admin, for posting this cult classic. This was very popular in Europe, in the 70s, when I was a student. Questions to those in their 20s and 30s, living in the US: is there still individuality in these times of social media, a meaning to words in this world of ‘alternative facts’, aren’t we back to the 19th century in these times of Amazon work ethics? Put it differently, is there really that much of a difference with present time USA and the dystopia portrayed here? The director seems to believe that any form of ‘civilization’ will end up as a dystopia, and that the only answer is a return to an anarchistic, ‘animal-like’ behavior. What do you think?

I hope this is fun.