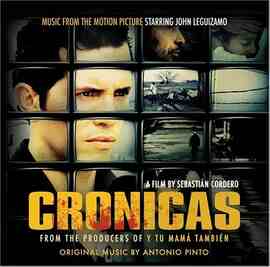 Plot – Spoilers:
Very loosely based on the Monster of the Andes, Pedro Lopez.

Vinicio is a middle-aged Ecuadorian peddling the Bible and other religious works that allow him to be a traveling man across South America. His real thing though is the rape, torture and murder of children in astonishing numbers. A narcissistic reporter meanwhile is on his trail while Vinicio plays the neighborhood general nice guy and husband to a pregnant woman with a young boy and baby girl.

Cronicas eschews the horrors of its crimes, but doesn’t let up on the creepiness and exhilarating rush bubbling inside Vinicio as he walks among regular folk, knowing he carries a deep secret that he continually is able to hide and pursue with the barest of means through sheer ingenuity and a sharp cunning. And this is all mostly down to a masterful performance from Damian Alcazar in what is arguably one of the greatest onscreen depictions of a killer.

John Leguizamo is a great actor and this role is perfect for him, the ambiguous hot shot famous tv news journalist. He’s been in a ton of movies and was really memorable as Benny Blanco in “Carlito’s Way.” Leguizamo is great in “Cronicas” and it is a good film but it does drag a bit. There is a lot of action near the beginning but then it becomes a “talkie.” It’s a drama. As far as effed up, well maybe a little. Those wooden bridges gave me the willies. 3.5 stars.

The serial killer this is based on,Pedro Alonso Lopez “Monster of the Andes” raped & killed by his reckoning 300 children throughout the 70s & early 80s,in the end 110 of these were confirmed & oddly enough,after being sentenced to prison for the murders,Pedro served his sentence & was released a free man,the justice system & laws are very weird in some south American countries,you’d assume that some of these places being so lawless,chaotic & violent that their would be capital punishment & prison sentences for eternity,but its the opposite,although being in prison over there is a pure he’ll on earth,the sentences are shockingly mild,so at the time the maximum sentence for murder (I can’t recall which part,Brazil,Columbia where the trial & jurisdiction was) was only 16 years & thats for any amount of murders whether it be 1 or 150,16 years was the Max,i find that shit just mind blowing,so Pedro served his 16 years,was released,driven to the border & told to fuck off & not come back,he wanderd off & disappeared never to be seen again,no one knows what became of him & no noticeable pattern of murders started up again which led some to speculate that a gang of the victims loved ones caught up with him somewhere & meted out some vigilante justice & disposed of him,who knows,point was a serial killer of 110 or more kids was lawfully released from prison,anyway just some useless information for those who felt like reading all this shit,I found it interesting

Child rape,fuck bruh I’m into it like a pre-teen faggots asshole haha

my erection dribbles for preteen boys

Hey all you fucking cowards. Steve really got you faggots good, didn’t he? He’s all you can think about night and day. It sounds like you hope he’ll get pedo on you. It’s obvious you little pussies are in elementary school. Do all the kids in elementary school give you high fives and slaps on the back when you talk about pedos and talk about fucking people’s mothers you little faggots? Grow up you immature gay cry babies. You’ve been spamming for days because Steve hurt you gay little feelings. Awwww. Ha ha you little faggots. Watch. These little faggots are going to have a major mental fit and spam like crazy now. You just wind these little pussies up and watch them go. There feelings are so hurt by Steve because he pinpointed exactly what they are – immature gay elementary school kid cry babies. Ha ha you fucking pussies. Cry for me you gay faggots.

John Leguizamo and Rosie Perez were excellent together in a film called The Take.
King of the Jungle featured another outstanding performance from him also.

cry baby fucking faggots!!!! preteen weiners getting all hard up for me cos im the fucking king so suck my salty sacks hahahaha

Hey all you faggots!!!! Steve got all you preteen fags good, cant stop dropping his name.

Best ecuadorian movie ever done! I like it more than “Ratas Ratones” that one is not fucked up but a good movie too.

@Admin. Any chance of some elucidation. Is this the future or just some welcome respite?

A nice little film but its fucked in the mind rather than on screen. My biggest problem was reading the subtitles (I am a slow reader) so I had to keep stopping and rewinding just to follow the conversations. The end snippet is definitely the nastiest few seconds of mind-fucking possible.

What a grrrreat movie