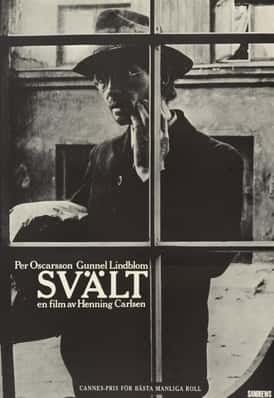 Plot – Spoilers:
A young writer is hungry, broke and without a place to sleep having been kicked out of his boarding. He is so poor that he returns to a pawnbroker to retrieve a pencil stub he’d forgotten in the coat he just sold. But despite his abject poverty, misery and starvation-induced hallucinations/delusions, he retains an immense pride in his goodness and philanthropy. He has elegant handwriting and a clear taste for the fine, but in his current situation, his delusions of nobility and an elevated class make him come across a fool. Every time he’s able to scrap together a few coins that buy him a meal, he finds an excuse to give them away (to the point of frustration for the viewer). Even if you’ve been in a phase like his and can empathize with his opinions, it is hard to sympathize with him, unless you’re right now in his phase. In which case of course, you probably would not be in a position to be watching him.

Hunger is based on the novel Sult by Nobel-winner Knut Hamsun who brought his own experiences as a struggling writer into his book. For fans of Dostoevsky, this is possibly as great a cinematic dramatization of a Dostoevsky work you can expect, with Per Oscarsson putting on a show of pure mastery.

extremely beautiful loved every minute of it

Thank you for posting a different theme like this. Not just about sex, gore, insanity and other fuck up shenanigans are considered effed up, sometimes real human misery like hunger/poverty is more hard to watch.

No this is not a story of human misery and hardship but a story of a man with ten counts of stupidity! Social realism my ass

Not sure why I’ve never seen this… Captivating and nicely shot… Could have been made last year it’s that well editied.
A real gritty and sad forlorn tale of abject poverty. His eating dust out of the digs cupboards is a sad a moment in cinema as any.

For a film at nearly two hours in length where not a lot actually happens it was tense and fast paced.

Not for gore hounds.. a thinking man’s Leighs Naked.

yeah, interesting flick about mental illness, or whatever this guys problem is. so real. I grew up with people somewhat like this… loved it, thanks again effed up

Depressing. A glimpse into the future for the next generation if the globalists and democrats get their way. Really good movie.

If you were moved by this film adaptation of Knut Hamsun’s “Hunger”, find yourself a copy of the book it was based on. I was drawn in and affected by it. Extremely strong work, as was this faithful and moving film adaptation of it.