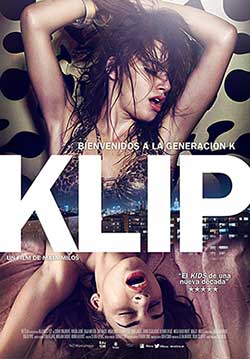 Plot – Spoilers:
Most people will have known a certain type of couple at least once in their lives – where you have one person obsessed with the other to the point of following their every movement unblinking and zombie-like. Klip is about one such girl Jasna, a teenager in a small Serbian town who’s obsessed with a senior thug, Ðole, from school.

Jasna has a relatively expensive phone with a good camera and she prefers seeing herself through it as video clips. This is to the point where she’s disconnected from her household realities that include a harried mother, dying father and a little sister. Her disconnection it appears began when her Dad was diagnosed with a terminal illness following which she grew more and more self-obsessed and selfish while her family adjusted their worlds around her selfishness with little to no expectations of her.

Ðole’s apathy and indifference to Jasna is beautifully captured in the little things. Like when they walk together, he walks at his own quick pace with no consideration to her presence while Jasna stumbles along, running every few steps to keep up with him in her tight fuck-me pants.

After several demeaning sexual encounters Ðole briefly warms to her and an emotional connect appears between the two which is kindled partly by Ðole discovering that Jasna’s mother was his mother’s best friend who used to babysit him.

So what happened at the end of Klip between Jasna and Ðole? Why did Ðole suddenly start treating Jasna badly again?
It could be that Jasna started behaving like a girlfriend – crying about personal issues and reacting without her earlier eagerness to Ðole’s invitations to hang out. Ðole who himself grew up without a father and with issues of his own possibly found her new girlfriend role oppressive and decides to set her right, back to the way she suited him.

Klip courted controversy and was banned in a few countries because the lead actress Isidora Simijonovic was 14 at the time of its making.

Awesome movie of my youth.

Meh….. that vapid, self-centered little slut deserves everything she got and a whole lot more. She would look wonderful as a centerpiece on my table, the main course, hot-tied with an apple in her mouth.

God i’m 17 and would be devastated if one of my parents was sick ….she is such a terrible person and a piece of shit fro treating her poor father like that

Oh boy, watching a: fake girl, getting fake fucked, by a fake dick. That’s how I spent my Friday night.