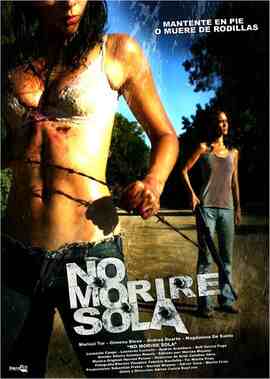 Plot – Spoilers:
Two sisters and a couple of friends are traveling through Argentina by road when they find a girl who’s been shot and left for dead. In the distance, through the trees, they see a group of armed men and so they take the girl and get the hell out of there. The girl dies and they find the local police station to file a complaint. Soon after, they are pursued by the men they’d seen earlier and their personal hell begins.

I’ll Never Die Alone alternates between clever shots and the campy. Some of the music during the assault is terrible – not sure if a deliberate attempt at being ironic or the filmmaker’s attempt to titillate in a bad-porno type of way. The girls also similarly alternate between aware/clever and frustrating – like when they claw for hours at mud during the burial scene when a shovel was lying around.

The version here is the longest available and was released as ‘Extended Sleaze Edition’ owing to 12 additional minutes of the assault.

Wake up Fat Fred, stop sleeping on the job.
Got half way through the movie before I had enough, slow and very unrealistic, just another tits and arse movie that could have been good if they didn’t use sex to sell it .

Woh ho! There’s some super sexy stuff in this one, folks! And at times even romantic!

Rape and sex at best

One of the best rape movies especially the uncut version

Its an artsy “I Spit On Your Grave”… the real one not the remake. All and all watchable but i agree with admin about the Soundtrack choices.

Down to patriarchy, the persiflage of little men trying to make women into sex vagabonds. Kill all men, these male fiends are not needed. I am an exceptional woman and i should rule this planet.