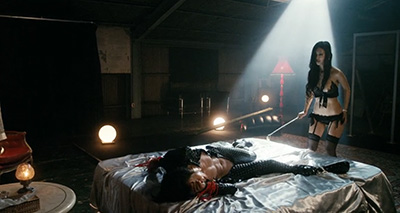 Plot – Spoilers:
Based on the novel Amai Muchi by Kei Ohishi, Sweet Whip aka Amai Muchi is the misery-ridden tale of Naoko who is currently a 30 year old doctor who seemingly enjoys her job as a gynecologist and is kind to her patients which comprise couples having problems conceiving a child.

But she has a dark side borne out of her traumatic experiences as a teenager. When she was 17, while walking back home one rainy day, she was abducted by a sadist who locked her up and tortured her day in and out for over a month. When she finally managed to escape she returned home to a mother who didn’t know how to deal with her daughter’s trauma and almost blanked out her existence.

Favorite scenes:
There are plenty of scenes of sexual torture from Naoko’s captivity as a teenager and also from her current job at the S&M club.

When the ‘real sadist’ walks towards her in the club, she instantly remembers the day during her captivity when her abductor discovers she’d stolen the knife and strangled her. During all her time being locked up and enduring pain, that moment was when she probably felt closest to death. And now, when the sadist walks up to her, she probably feels a shudder as she senses he is true to his role as a sadist and can go to any extreme length.